I don't anticipate doing many product reviews on this blog. The Scumbag, made by collaboration between Blind Chic and Lokal Skateshop, is an exception. 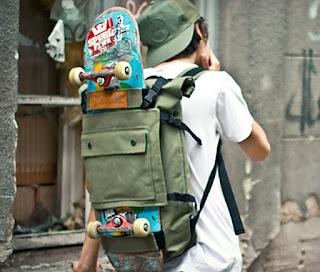 I have been skating, and biking, for almost 30 years. During that time, I've had several backpacks "designed" to carry a skateboard. These were all made by skate companies. None of them were "bullet proof," and none of the really cut it if you were riding a bike, esp. in the city. Either the board was not secure enough, so it jostled around too much on a bike ride, or the board fit in the bag sideways, making it less than ideal for weaving about city traffic (e.g. you became too "wide" to fit between cars). Yeah, you can do some shit with bungee cords, but it's just a pain in the ass. The skateboard brand-made bags were good for walking around, with your board attached to the bag, but were just insufficient for biking. Bike-brand made bags were also awkward for carrying a board. For a long time, I did a set-up like this with my Chrome bag ("Citizens" model). 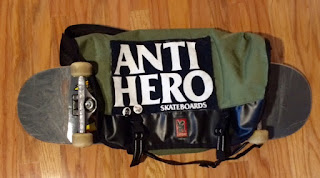 This worked, but it was sketchy, and not very secure. If anything else was in the bag, esp. it if was something hard (e.g. bike tools), it really hurt against your back when riding. Not an ideal set-up.

To fully resolve the issue, it was going to take skaters, who also cycle, to design something. It finally happened with the Scumbag. I should have known this would come out of Europe (where there is a much larger cycling community) and not America. The reason I am reviewing this product is that while the Scumbag can be shipped to the U.S., it is not a product that is often seen in American skate or bike shops (if ever). Hence, you might not ever be exposed to this product, and that is a damn shame.

Full-specs of the bag can be found here. There are a lot of reviews of the Scumbag already. Some can be read here, here, and here. Those, are mostly sale/talking points. What makes this review different? Well, I've had my Scumbag for a year, and I actually skate. I ride my bike everywhere. I don't think the other reviews can make those claims; I'm going to give you the real deal, with a long-term review.

Watch the video (first link posted), and the "full-specs" link before you read any further, so you'll have some idea of logistical stuff I'm referring to in the rest of this review.

Over-All Quality: Bag is fucking solid. HANDMADE. Thick heavy material. Solid seems. My only concern was the plastic fasteners that link the various straps together. I was worried they would break. 1-year later, there hasn't been any problem. Even if they did break, I am sure I could find a replacement part pretty easy. The snaps on the outer pocket can be a little hard to engage, but they are not any real issue. Velcro closure may have been a better (functional) design option, but the buttons are a cool retro style. I like them. The sections of the bag where grip tape makes the most contact (e.g. center, and straps) have good reinforcement to help prevent wear. Bag is super high quality, and there is little question that it will probably outlive the rest of my skateboard career. I should also add that I have FOUR different bags that I use/wear when cycling. They all serve very different, specific, functions. More on this later in the review. For now, I will just say that I (mostly) have only used the Scumbag when I needed to carry my board. Hence, I have never exposed it to the rain (don't want my board getting wet), so I can't comment on how well it handles bad weather. Also, I have not used this bag daily, so it has not seen as much use/abuse as my Chrome bags (but it has certainly seen plenty of use).

Close-up of seems, after 1 year of use. No sign of failure. 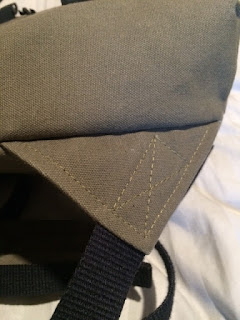 Plastic clips, I was afraid might break, but haven't: 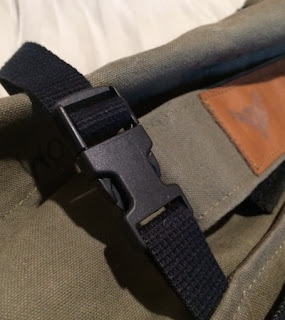 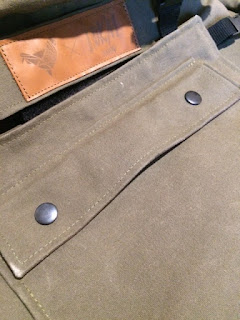 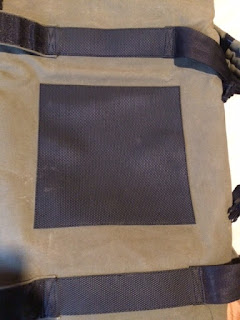 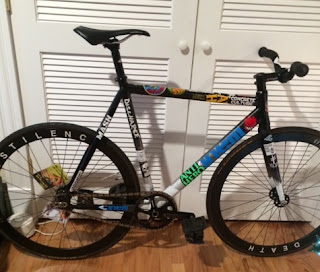 The geometry of my bike has me learning forward a bit more than most bikes would, but not by too much. If my board is attached to the Scumbag, and not much else is in the bag, the nose of the board hits me in the back of the head, esp. if I am wearing a helmet. Here is a photo of me standing with a bike helmet on, board strapped in, and the bag empty. You can see how close the nose of the board is to my head (sorry for poor quality pics on these). NOTE: if you ride an old-school deck, with very short nose, this is not a problem, at all. 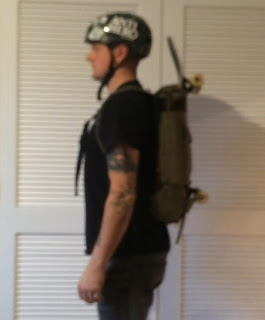 Here is a photo me hunched-over, as if I was riding my bike. You can see board hitting back of the helmet. Not good. 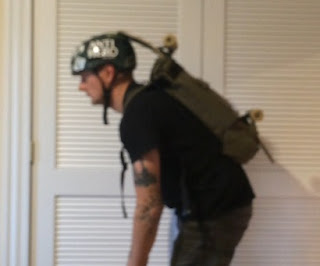 This is a major problem. You cannot effectively ride a bike with this going on. I had the exact same problem with other skate brand-made bags, too. Does this make the Scumbag useless? No. There are two ways to fix the issue. First, is to add stuff to the bag. This moves the board further away from your body/head, and remedies the problem. In this photo, I have a bunch of stuff (clothes) stuffed in the bag. See photos below. 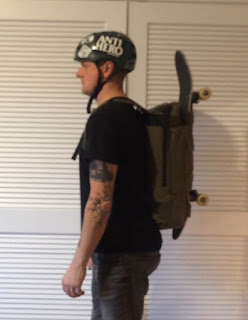 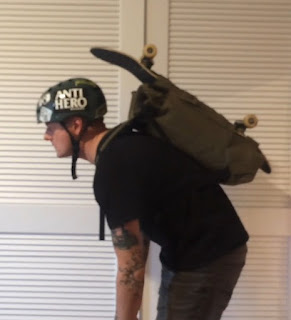 But what if you don't want to add extra crap to the bag, or deal with the extra weight? There is still away to remedy the problem; take one strap, and wear the bag over-the-shoulder, like a messenger bag. Doing this puts the nose of the board off to the side of your head. You can clip the other strap around your side, just like with a regular messenger bags. This is the way I most often wear the Scumbag when on my bike. I wont lie. This method is slightly awkward, and not 100% perfect, but even in this mode, the Scumbag is far, far, far, better than any other bag I have ever seen for carrying a skateboard while on a bike. 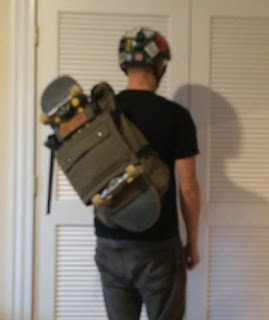 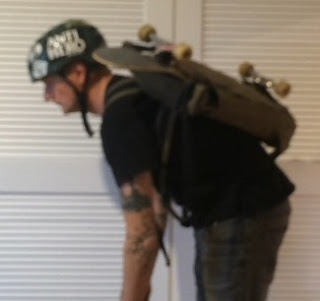 Functionality as Back Pack: As mentioned above, I have 4 different bags that I use on a regular basis. They are a Condor Commuter Pack, a Chrome "Citizen," a Chrome "Lieutenant" (no longer in production), and my Scumbag. The Condor and Citizen have smaller organizers inside them for pens, phone, etc. The Lieutenant and Scumbag do not. The Condor and Lieutenant are good for carrying my laptop (the other two, not so much). The internal pocket on the Scumbag is basically situated right at the center of your back. Potentially could be uncomfortable with something hard in there, but haven't had much problem with it. It would be nice if the Scumbag's external pocket had smaller sub-divisions to organize smaller stuff, but lack of that is by no means a deal-breaker. You can certainly fit a lot stuff inside the Scumbag, it just may not be super organized, and you can't fit huge bulky stuff in it. As a backpack, this is not my daily-use bag. That should say something about its over-all functionality as backpack. The Scumbag is not designed to be daily organizer; it is designed to be skateboard carrier, that works well while biking. Hence, I cannot fault anyone for lack of micro-organization within the sub-pockets. That said, if I could only keep one of my bags, there is no question that Scumbag would be the one I keep. Its lack of size/internal organization is more than made up for by its ability to carry my skateboard. For size comparison, here are all of my my bags. IMHO, the Scumbag has super rad retro cold-war military style to it, that I just love beyond belief. 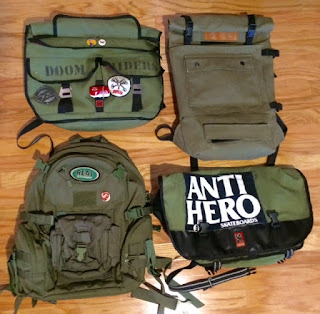 
Customer Service: Outstanding. This is something I wrote in Dec 2014 on a bike forum when I had ordered the bag:  I ordered last Thursday (Dec 4) after work. When I got up in the AM (Dec 5) they had emailed me. Said they had some in stock, and if I got back to them quickly with address confirmation, they'd send it out today (Dec 5). By time I had woken up, it was too late. They said it would go out Monday, Dec 8. Shipping was like $30. Seemed a little high, but coming from Hungary and all, not too bad. On Monday they send me an email with tracking #. I take a quick look at it. I notice it says "Estimated Delivery, Tuesday Dec 9." I'm like NO. WAY. Has to be mistake." For shits and giggles, I check it after I get out of work on Monday night. Tracking reads, "Arrived at sorting facility in New Jersey, USA." Mind. Blown. It arrived on Tuesday, Dec 9. Overnight shipping from Hungary. Insane.

The Bottom Line: an unbelievably, high quality, handmade, bag that is the best skate/bike bag ever produced. Has a minor functionality issue, that has two easy work-arounds. Bad-ass retro styling. Produced by woman-owned cycling company in conjunction with a skater-owned skate shop (you should be stoked to support both). If you ride a bike, and skateboard, you need to own a Scumbag. End of story.

You can order one here.

(I am not affiliated with Blind Chic, or the Lokal Skateshop).

UPDATE: Someone asked about wider boards. They also fit. Here is a photo of my Powell Tommy G. reissue in the bag. It is 9.5 inches wide. Clearly, decks wider than 9.5 would also fit. 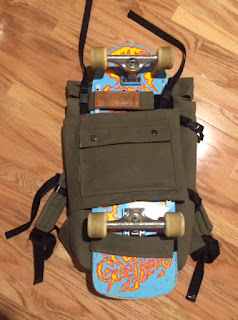 JULY 2016 UPDATE: Bag is still going strong as hell. No problems, what-so-ever. Again, worth every single fucking cent I spent on it.

NOVEMBER 2016 UPDATE I: As I mentioned above, my one big fear about this bag was the plastic clips breaking. Well, one finally did. One of the side prongs broke off a few weeks ago. I've now had this bag for 2 years, and it has gotten a shit load of use. That the plastic clips have lasted as long as they did is somewhat of miracle. The clip still works with one of the side teeth gone, so I haven't replaced it yet. It appears you can get them very cheap on Amazon. Earlier this year I also started using the Scumbag as my daily backpack (which I hadn't done before). All the seams, etc. are still rock solid. Again, the bag is worth every single fucking cent.

NOVEMBER 2016 UPDATE II: As I also said above, in order to really make a good bag that holds a skateboard, "it was going to take a skater, who also cycles, to design something." John Cardiel is indeed one such person. His Fortnight bag by Chrome might really give the Scumbag a run for its money. I may end up buying one just because I am so curious about it. If I do, a review will certainly be posted.