The Making of a Skate Punk, Part IV: Shot in the Head, Suicide, and the Start of a New Life

Part I: Shot in the Head, Suicide, and the Start of a New Life

The Danny Way Incident of 1989 took place. That link is a blog post from awhile back. You should read that it before going any further with this one. It provides a setting for the suicide attempt mentioned at the end of my last post, and how D. Way factored in. I’ll provide a bit more context here, but not that much. It was one of the blackest periods of my life, and not one I really want to revisit in great detail. Moreover, I don’t want this to be a doom and gloom blog. I want it to (mostly) be a blog about how awesome, and positive, skateboarding is. That said, I can’t tell my story without shinning some light into few dark corners.

The late fall of 1989, and moving into winter 1989/1990 was a bleak. My parents were pretty religious. I was pretty sure they would kick me out of the house if they knew I was gay. My friends (at least they presented as such) were really homophobic. The jock kids at school? Forget it. If the truth came out, I was nearly certain that I would ended up abandoned by my family and friends, homeless, and shunned by all society, even skaters. While this may not have been the actual truth, it was my perception. Society was very different back then, and much, much harsher. It was horrifying. I had never met a gay person. I didn’t think it was possible for teenagers to be gay. All I knew about gay people was that they were diseased infested old men who preyed on children. I. Was. Terrified. Moreover, I hated myself. Everything all those jock kids said about me, I now started to believe. I was a horrible person, a super-faggot-freak, who was worthy of only exile, ridicule, and probably death. I went as deep into the closet as I could. My internalized homophobia was crippling. I didn’t believe in God, but I started praying for him to “fix me.” Nothing fails like prayer. Acute depression started to grip me, and there was no one I could talk to about it. I was utterly alone. Skating was my only escape. The only thing I had left that I could believe in. The only thing that could make me smile. Without it, I doubt I would be alive to type these words.

In 1990, I started 10th grade at Norwood High School. It would be my last year at that school. I started the year with my dark secret. I was terrified anything I would do or say would disclose the truth. I withdrew more, and more. There was a kid named Dwayne Harris who lived in the apartment complex near my house. Somehow we had become friends. He had moved to the area the year before. His mom was a Boston Police officer. They had lived in one of the worst section of Boston. His mom wanted him out of the city, and away from the violence. They moved to Norwood. One winter morning on a biblically cold, wet, and windy day, just as my mom was about to give me a ride to school, we saw Dwayne outside, walking to school. He was struggling against the wind just to stand-up, he was drenched, and it was obvious he was freezing. We offered him a ride, and then continued to drive him almost daily for the rest of that winter. One day he did not show up. We though this odd. The next time I saw him, he was in casket. The night before his mother and her boyfriend got into some type of argument. He attacked her. Her service revolver from work somehow went off. The bullet went through the wall, into the next room where Dwayne was doing his homework. It hit him in his temple, went into his skull, and killed him. The irony of this story is nauseating; a single mother who removes her son from the city to shield him from violence, and ends up accidently shooting him in the head with her police issued gun. I was a mess. I stopped skating for about 2 months. The fallout from this case made it all the way to Massachusetts Supreme Court (which I just found out in 2016 while researching this incident). I have always saved this photo of Dwayne from his obituary. 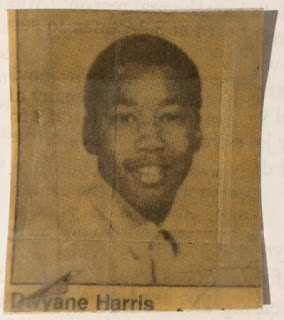 The school year ground on and on. After the Danny Way incident of 1989, I was hyper-sensitive to just how homophobic my school was. Students. Teachers. Everyone. Things got darker, and darker. Fade to Black by Metallica seemed realer, and realer every time I listened to it. 25+ years later, and I still have a hard time hearing that track. I had no idea "self-injurious behavior" was even a "thing," but I started burning myself. Still have the scars on my arm. I have never spoken about that, until writing that last sentence. I don’t remember what the triggering event was, but I eventually attempted suicide…sleeping pills. I didn’t take enough. I eventually woke up. My parents never knew what happened. I just told them was sick. I had become very good at hiding things from them.

Despite all this negative stuff, something mind-blowingly amazing happened that winter. The guy who owned Beacon Hill Skate, in Boston, offered me a part time job at the shop. This was basically every skater’s dream. It was THE skate shop in Boston, and had been since the early 1980s. The famous ‘zine Contort had come out of Beacon Hill Skate. It was the same shop that future Boston pro Jahmal Williams worked at (and occasionally, Robbie Gangemi worked there, too). At the time, anything that happened in the Boston skate scene, happened through that skate shop, and now **I** worked there. Moreover, I was on the shop’s skate team. Free skate stuff, or stuff at wholesale prices. Talking to sales reps and “famous” people on the phone. Notoriety around the city and suburbs. A real reason to spend my time away from Norwood. Was all of this really happening, to me? I started to think their might be a God. The Rocco Era was ramping up to shake skateboarding to it's very foundation. Huge pants, tiny wheels, total chaos. Big change was coming for all of us, but it wasn't quite there...yet.

Summer came. I eventually told my parents that I was not going back to Norwood High School. I told them there were two options, (1) either I attend a different high school, or (2) I drop out. They realized I was dead serious. I only told them that I hated the school, and all the people/staff in it. All of which was true, but I didn’t tell them the real reason; I was terrified of how homophobic the school was, and how terrified I was that someone would find out about me. They knew I hated school, knew I was I was targeted because I was a skater, but had no idea about the gay factor. For my last two years of high school, I switched to a very small private prep school in Boston. Even better, my school was now just a few blocks from both the famous Boston skate spot of Copley Sq., and my job at the skate shop. I was living the dream, despite the fact that I was actually living in constant dread that any day, it would all come crashing down if people found out the truth about me. I won’t say whom, because some of them (not all) are nationally known, but there were a number of Boston skaters who were virulently homophobic at time. Worse than I had ever seen before. Over the years I lost contact with those people. My only hope for them is that their life is no longer filled with the hate it once was.

Then came another God-send. They Weymouth Crew. While skating in Copley Sq., one day, I saw these group of kids I hadn’t seen before. They were all from Weymouth, MA. One of them had a giant blonde/green afro. He was wearing these crazy weird green corduroy pants, and a freaky green suit-vest thing. It was hilarious. His name was Marc. He was skating with this other kid named Brett, and this older guy named Steve. Not only were they all killing it, but they were cracking jokes, doing all kinds of crazy antics, and having more straight-up FUN skating than anyone I had ever seen before, or pretty much since (Fancy Lad crew from Boston comes close). It was basically like “Junk Skating” with Lance, O, and Neil was happening right in front on me. I hadn’t laughed that hard in a long, long time. We became the best of friends, and the shenanigans that followed for the next 5 years were unparalleled. Things were starting to look a bit brighter, even if there was a huge, dark, secret hanging over my head. Santa Cruz dropped A Reason for Living that year. The name resonated, for reasons known only to me. Fade to Black began to fade back into light...and skateboarding was what kept me going the entire time.

Next Part: Getting a sponsorship offer while at Woodward, trips to Alien Workshop (and almost working there), and becoming the angriest kid in Boston.
Posted by sedition at 1:29 PM