The Making of a Skate Punk, Part V: Almost Getting Sponsored, Almost Working for Alien Workshop, and Almost the Internet

Almost Getting Sponsored, Almost Working for Alien Workshop, and Almost the Internet

[The last two posts in this series were a bit of doom and gloom. That part of the story is now over, thankfully. As previously stated, this blog is to be mostly focused on the positive and empowering aspects of skateboarding and existence. However, as also said before, I can’t truthfully recount my experiences without shining light into a few dark corners. Skateboarding was a main factor in helping me traverse troubled waters, so even the darker posts retain elements of the main objective (e.g. skating as a positive/empowering force…perhaps those posts illuminate the point even more so). Anyway, with this entry, we are now headed of out the black and back to light.]

After I switch schools to Boston, things were going along pretty well. In the summer of ’92 I went to Woodward Skate Camp (before it was crazy expensive) with two of my best friends from Boston, Vanik Hacobian and Linas Phillips. Vanik later turned pro for Santa Cruz, and Linas became an actor (one of the funniest people I've ever met). While we were at Woodward, Bod Boyle took note of Vanik, and this is what led to him getting hooked-up with SC. There was also this guy there named Sean Andrews (if I recall) who was associated with Acme. He was stoked on me, and wanted me to send in a video. He said I wouldn’t have any problem getting on the team, especially since he had already seen me skate in person. I was floored. Speechless. Oddly, I never sent in a video. Why? I am not sure. I think I balked at the pressure. I think I was too scared about the cover-up game I was playing with the whole gay thing. What I do know is that I had the chance almost ever skater dreams of, and I walked away from it. Linas and I filmed a little bit for it, but it quickly ended. I think what mattered the most was not actually being a sponsored skater, but the offer. In my book, it’s always that thought that counts the most, and the thought had been made. I was happy enough with just the recognition. The rest was superfluous.

In 1991 Blind dropped Video Days. Big, double-kinked handrails. Huge gaps. Technical manual variations. A new era was being ushered in, and Steve Rocco led it. Things hadn’t totally exploded into Rocco Domination yet, but he was nearing the height of his power. Street skating was progressing at break-neck speed, but it also started to get pretty lame. By late 1992, everyone was dressing the same. Huge, oversized clothes, and tiny wheels. Loose clothes have a definite advantage in skating. They make it much easier to move, and jump around. Likewise, smaller wheels are better for street skating than giant ramp wheels. But, of course, everything was taken to an absurd extreme. Not only did everyone look the same, but everyone started skating the same. It was like watching a compulsory run of pressure flips and late-shove it variations. Vert died. Equipment choice was non-existent. There was only technical, slow-rolling, street skating on 7.5” boards, and that was it. Moreover, skate culture became stand-offish with itself. Rocco wanted to push the envelope as far as he possibly could, and he forever changed skateboarding along the way. The big companies couldn’t keep up with how fast things were changing. Everyone started jumping ship to start their own companies. One of them, was this weird-ass little project based out of Dayton, Ohio. It was called Alien Workshop. More on this later.

In 1992, another major video dropped. Plan B. Questionable. I was still transfixed on Danny Way. With Questionable, Danny had become an absurd street skater, almost overnight. I swooned. Awhile after this video came out, me and Marc (the crazy green haired kid from Weymouth Crew, mentioned in previous posts) did this 13-stair handrail. 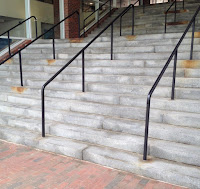 It was (and still is) the biggest rail I ever did (and only a just board slide). The Plan B video, however, was so insane that it put the final nail in the coffin of any hopes we ever had of becoming pro skaters (yes, I realize the irony of this statement, especially in consideration of the video I never sent in). The Questionable video just made us realize how vast the gap had grown between the average skater’s abilities, and what pros were now doing. Back to the 13 star rail. Marc and I were talking not long after we did that rail. Both us were laughing at the fact that a 13-stair handrail was “no longer a big deal.” If I had seen Natas do a rail that long when I was 12, my head would have exploded. A serious “stuntman factor” was now an element of top level street skating. I had already broken numerous bones. I had a doctor once tell me that a bone in my wrist had been broken for “9-12 months” before I went to get it checked out. I didn’t want (moreover, didn’t have the ability) to play the stuntman game that was now emerging in modern skating (and this over 20 years ago!). This was actually a very liberating moment. From that point forward, I gave up all the dumb, unrealistic, teenage ideals about what skateboarding owed me. I was free from the self-imposed pressure. I was free from trying to impress anyone. It was as if I had just discovered a skateboard for the first time, all over again. Skating was suddenly more fun than it had been in years. This was also a huge paradigm shift, because I had become on the angriest kids in Boston. I was notorious for throwing my board around, breaking it when I got pissed off, and otherwise just not being all that fun to be around. Anyone watching from the outside would have said, “Damn. That kid clearly has some underlying issues that need to get worked out. No one is that angry over just skateboarding.” They would have been 100% right, but it took me a long time realize what all that anger was really about; being “in the closet.”

Alien Workshop. Alien was run by Chris Carter, Mike Hill, Joe Bowers, and Neil Blender. Carter and Hill were the main forces. Me and they Weymouth Crew were HUGE Blender fans. We pounced on Alien from the start. Everything about Alien resonated with the freak-show my crew was to the general Boston skate scene. Alien was an alternative to…Rocco, and a much needed one. The owner of the skate shop I worked at wasn’t a skater. He often asked Jahmal Williams and I for input on what to order. I convinced him to get Alien stuff as soon as it came out. We were one of the first shops on the East Coast to carry Alien because I pushed him so hard on it. I often talked to Joe Bowers on the phone. When I graduated from high school in 1993, I talked to Joe, and that August we went a road trip out to Dayton to visit The Workshop and hang out with Alien crew. The trip was fun. Everyone at Alien was super cool. Blender, unfortunately, wasn’t there that week.

I had no intention of going college right after high school. I had hated school so much, that I needed a break. In 1994, I got the idea that I should move to Ohio, and get a job in Alien’s shipping department. I took another road trip out there, and talked to Chris Carter and Mike Hill about it. They were cool with the idea. They said Alien was growing, and would need more help in the future. I went back to Boston, and started working out move logistics. Mike Hill and I would talk conspiracy theory on the phone, and from time to time they would send me free decks and stuff. My first tattoo was the old round AW logo. Oddly, with time, all my best friends (The Weymouth Crew) moved out to Ohio, and I stayed in Boston. I was the one who had Ohio connections. I was the one who had started all the Alien road trips. I was the one who had a job prospect. I was the first one talking about moving out there. Yet, they went, and I didn’t. Irony always wins in the end. That is another story for another time.

Anyone who is paying close attention to the time line will recognize that during these years a major force in the world was emerging, and I have yet to mention it. The Internet.

Usenet groups were the early forms of web forums. IRC were early forms of chat rooms.
Alt.skate-board was the skateboard usenet group, and #Skate was the IRC channel (that is not a hashtag. All IRC channels started with a # sign). These two mediums provided to be a hot-bed for future socialites, magazine producers, and musicians. We were among the first generation of skaters who were “on-line,” and we formed a pretty close-nit group. A few of the recognizable names that could be found chatting on #skate late into the night; Rick Valenzuela who later started Journal Magazine, Lucas Wisenthal of the Ride Channel, and Nancy Whang (hell, everyone knows who she is).

Next Post
-Actually getting sponsored
-The Internet awakens
-The truth “comes out”
-Boston Exodus, Suburban Wasteland
Posted by sedition at 2:02 AM