Product reviews are not a regular feature of this blog. When I do post a review, it is because either (1) the item is not widely known (e.g. the Scumbag), or (2) it is an item people might be curious about, but may not want to spend money on without more info. Following the latter, I am now reviewing some quasi “oddball” wheels. The Big Pants Revisited was going to be a separate post, as it isn’t really a “product review.” However, with a hammer, and the ability to ignore the shaving, a square peg fit will fit into a round hole.

First, I should provide detail about my set-up, as to establish a “baseline” of what I am used to riding, as this becomes a factor later on in the review.

Risers: None, but I do ride those paper-thin vibration eliminator thingy-do-hickys.

Wheels: 54mm Spitfire Bigheads, 99a. These are almost exact same shape as the “Classic” wheel.

I live in Boston. New England is notorious for crusty terrain. There are places in the region where the standard size and durometer wheels are problematic. Something a little softer, and bigger, can open up a lot of doors. With this in mind, a few months back I purchased a set of the Spitfire Soft D’s 95a 54mm wheels. I got these because I didn’t want to get too crazy, too fast. There were other options for soft wheels, but this was only a slight drop in durometer, and they were essentially the same wheel shape I always ride. I loved the 95a’s. They didn’t slide as good as the 99a, were a tad slower, but the ride was a bit smoother on rougher terrain. Would absolutely recommend those wheels to anyone. With time, I decided to get even more extreme. I was curious what the 92 Soft D’s would be like, and the 80HDs just seemed, well, let’s just say I was really curious about them.

80HD: When I first laid on eyes these, my though was “OMFG. These things are huge. Monster truck tires. Elephantiasis. Dirigible, Hindenburg, size of. Yet, they were only TWO mm bigger than my usual size wheels. I quickly realized the reason they looked so big was the shape of the wheel. The “conical” shape has a lot more riding surface than the “classic” Spitfire wheel, and this is what I was reacting to. An overview of Spitfire wheel shapes can seen here. The 80HD’s are also “cored,” meaning that the center of the wheel is harder than riding surface area, so this creates a different feel than riding a pure 80a wheel. I was eager to try them out.

Last night I took all my wheels sets and went out to a local parking lot/curb zone. I put the HDs on, and dropped my board the ground. The sound alone let me know I was in for a HUGE difference. Gone was the “rattle” of hard wheels. When my board hit the ground, it sounded more like a large rock hitting water. With the first push, I immediately noticed a height difference in my deck. My “regular” wheels started out 54mm, but I am sure are closer to 52mm at this point (natural wear). So, throwing on the brand new HDs definitely jacked up the height of the board a bit. For some reason, the board also felt wider. I couldn’t figure out the reason for the, until I put the 92a Soft D’s on. The reason was the shape of the wheels. The HDs have a much wider riding surface. This made the board feel more grounded, and “stable.” I think is why I was experiencing the board as if it was “wider.” The HDs certainly gripped the ground more than my regular wheels. It was a little unsettling. I skated around for a bit, hit some curb tricks (50/50s, etc.). The add height of the deck made my ollies feel really off for a while. The timing was just different. I had a few problems with the HDs “grabbing” the curb when doing tailslides/noseslides. They just don’t slide the same as harder wheels. Kickflips, nollie flips, and other flip tricks felt slower and more sluggish. I got wheel bite a few times from the larger size. The ride of the wheels, however, was amazing. It felt like I was driving a sofa. The pavement felt so cushy. Softer wheels have this bazaar feeling of being both fast, and slow, at the same time. I skated these around for about another 15 min, and then put the 92a Soft D’s on.

92a Soft D’s: With the first push on these, I noticed the difference wheel shape makes. With a smaller riding surface than the HDs, these felt much more “normal” to me. The board didn’t feel as “wide.” The height issue was still there, but it didn’t seem to be as acute (prolly just because I was getting used to by now). These wheels were a lot of fun. I could make them slide on curbs (certainly more so than then HDs), and they felt a bit faster, but also smoothed things out a bit. The classic shape made popping out of grinds seem easier (esp. 50-50s). Flip tricks felt less sluggish. Overall, I liked these better than the 80HDs. I then put the 99a Bigheads back on. I immediately noticed how “rough” the ground felt, how much faster they were, and how my board felt like it was at a “normal” height again. Nose/tailsides on curbs were met with almost no resistance.

A few Things To Note: I tried all of these wheels on smooth asphalt, where “all other things were equal.” These wheels are not designed or intended for “all things to be equal.” Or rather, I have no intention of using them that way. Examples: There is a 1.5 mile hill in my hometown that was really fun to bomb as a kid. Shit to ollie over. Metal edges curbs, etc. Over the years, the pavement has deteriorated a great deal. 99a wheels on the hill kind of suck. I am sure the 92a Soft D’s or the HD’s will once again unlock real fun on the hill. There are few banks I know of that are crusty as hell. The HDs will most likely allow me to skate them. There is 4’ metal mini ramp near me. My 99a wheels slide out like all hell on it. The 92s are prolly going to kick ass on that thing. My point here is that essentially a comparison of these wheels is apples and oranges, as they are going to be used in very different situations. What this initial review was intended to do was provide a First Impressions look at them in “neutral” terrain. I will post follow-up reviews on both of these as I use them in different contexts, and also note how they hold up over time. A long-term review will be forthcoming.

I should also note that the 80HDs come in both the “classic” and "conical shape, and in 54mm, 56mm, and 58mm. I was going to get 56mm classic shaped, but I went with the conical for the sole purpose of trying something different (I always ride the classic shape). I’m pretty curious as to the classic shape would ride. Likewise, the Soft D's come in 92a/95a, and in 54mm/56mm. The Soft D's only come in the "classic" shape.  I went with 56mm, to try something a bit larger, for experimentation sake. Gut reaction: I’d prolly buy the 54mm size next time around.

The early 90s. I was there. I bore witness to horror (note, those are shorts, not pants). 25mm wheels, and 125” pants. A tragedy to make Homer jealous. Worse, I even took part in the war crimes. I worked at a skate shop then. Blind, Fuct, 40s, and Droors jeans were all available to me, for cheap. I had many pairs. The SMBP-era (small wheels/big pants) started with reasonable assumptions. Small wheels were better for street skating. Loose clothes are easier to move in. Then shit just went turbo-clown-crazy.

At some point when I was 12 or 13 I went into my first Army/Navy store. It started a life-long obsession with both anything olive drab, and WWII/cold-war history. When I went into the store, I also discovered “army pants” (otherwise known as BDUs, or “field pants”). From the age of 13, up to today, almost any photo me skating depicts me wearing olive drab or black BDUs, and a black skate shirt. My “style” has never changed (aside from that one spell in the early 90s, when I was known to wear excessively large denim pants). During the big pants era, I discovered WWII, Korean, and Vietnam-era field pants. By normal people standards, they were huge. By early 90s skate standards, they were big, but not quite cool enough. These became my go-tos.

As the SMPB-era started to wane, and I withdrew from direct involvement with mainstream skate culture, I went back to wearing modern day BDUs. The Korean/Vietnam era pants I had went into storage, I never tossed them, because I couldn’t bring myself to get rid of military history. In December 2015 I was at my parent’s house. I stumbled across the old pants in their attic. I decided I had to try skating in them again, just for comedy sake.

I brought them back to the city with me, where they remained in my closet until last night. When I went out to test ride the wheels above, I broke out the old army pants. I skated around for about 30 min in my regular BDUs, and then switched over to the WWII pair. The second I put them on, before I had even buttoned up the fly, or put my belt on, I knew. These were still the most comfortable pants I had ever skated in. I couldn’t exactly figure out why. I skated in them for about 30 min, and loved every second. They were just so catastrophically more comfortable than anything I had skated in for the last 10-15 years. After a bit, I put my regular BDUs back on. It took just one push to realize why the bigger WWII versions were so much better. The regular BDUs, which remain loose pants by any normal standards, still cinch a bit in the thigh/knee/rear area when skating [pushing, jumping (ollie or boneless), etc.]. The WWII version had NO resistance in those areas. At all. None. Zero. Not. Even. A. Hint. The result: Everything felt so much more effortless, flowing, and, well, straight-up cozy-time-awesome. Again, these pants are nowhere near the size of proper 90s skate pants, but they are substantially larger than most “slacks” you will run across today, including modern BDUs. 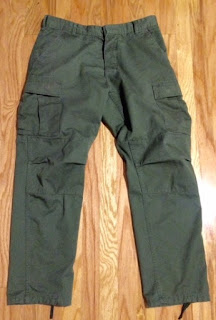 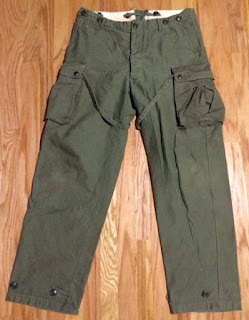 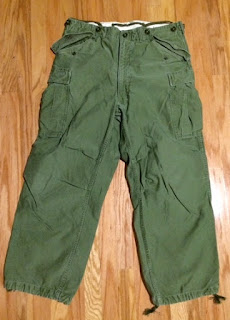 Not pictured are M-65 (1965) Field Pants from the Vietnam Era, which are essentially the same as the M-51 versions. 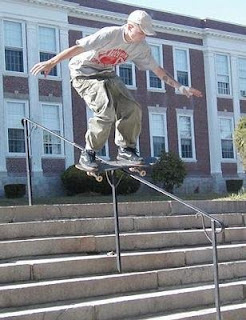 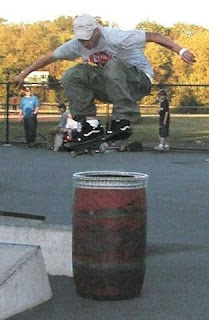 Conclusion: While I’m certainly not going back to 90s SWBP-era absurdity, I might start rocking WWII and Korean-era apocalypse “fashion” all over again; It's just too damn comfortable. The future is the past. There is no chance in hell, however, that I will ever revisit 25mm wheels. :)