Reduction to Ash & Playing the Long-Game

“The more sand that has escaped from the hourglass of our life, the clearer we should see through it.” –Jean-Paul Sartre

Over the last year or so I have often mentioned, talked, and posted about pads. There is a real reason for that. They literally changed everything about skateboarding for me (opened the door to transition skating for the first time in my life). When something has a major impact on your life it often becomes a topic of thought and discussion. This is even more so for me, because I was one of those guys. You know the type. The ones who despised wearing pads, claimed that they actually give you less incentive to land something, thought they were uncomfortable/hinder movement,* and pretty much refused to wear them at any cost. I didn’t care if anyone else wore them, but me, no fucking way—I was too cool for school. If fact, I steered-clear of transition for decades because of my inane loathing for pads. What a complete and utter fool I was.

*I still believe they hinder movement and/or are cumbersome for tech street skating. I don't (yet) wear pads on street, but with age I am sure that day will eventually come.

In 2019 there is no place I would rather be than skating a ramp with my gear on. Irony always wins in the end. Today, I can say that pads have literally changed my life in the last 18 months, and they opened doors I never thought possible. I’ve been meaning to post something about them for a while, but procrastination is a real thing. My previous post unintentionally got the ball rolling. Once I finally started this longer post, I soon realize it wasn’t actually only about pads. There was something much bigger and deeper going on, but you'll have to read to the end for that. Everything in life is a metaphor for something else.


I currently only wear pads when skating transition. At first I only wore them in deep bowls. However, with time the size of ramp(s) that “mandated” wearing them became smaller and smaller. I suppose that is a function of (old) age. Now I won’t even go near a mere 4’ tall ramp without knee/elbow pads. The helmet comes out once in the 5’ height range (I wasn’t wearing one on 5’ ramps, until I hit my head. Lesson learned). In a previous post I mentioned a few reasons why I wear pads on “smaller” sized ramps. The present post is a longer follow-up, which illuminates other reasons I have fallen in love with pads (pun intended).

And just to clarify, I am not in anyway trying to be one of those evangelical (p)advocates that attempts to pursuade everyone to wear a helmet/pads/etc. any time they even look at a skateboard. Those people suck. My comments here are only about my own experiences (with some universal truths about getting older). If they resonate, great. If not, cast it all to flames.

(1) Pads Actually Work
Pads directly and indirectly prevent injury. This isn’t debatable. As a skater, it is a hard fact of life that we will fall and we will get hurt. As skater in his mid-40s, it is an even harder fact of life that, (a) we become increasingly more vulnerable to injury with age, and (b) healing/recovery takes much longer than it used to. To add insult to injury, getting taken-out on some stupid, little, minor bail (e.g. see video in previous post) that could have easily been prevented with pads is just...well, that is some full-on turboclown type shit. Not skating because of a dumb injury means a nice stint with existential despair and misery. No one wants star in their own Kafka or Camus novel because they stepped on their board again while running out of a bail, which would have been better served with a knee slide. That’s just a dolt move, and 100% avoidable.

Moreover, mini ramps can bite much harder than bigger ramps. As someone on Facebook aptly said, “Minis can be more dangerous. You don’t have as big of a landing zone, or the time to get there. One second you’re on the coping, the next you’ve fallen straight to the flat bottom. When your reflexes, balance, core strength, and flexibility are not what they used to be, and when your brain remembers things your body can’t do as well anymore, pads can be the only thing that saves your ass.” A friend of mine got this hipper on a 4’ high mini ramp. He hung-up on a b/s Smith, and tried to run-out of it. He realized he couldn’t, and then tried to fall/roll on to his side to lessen the blow. But by then, it was too late. He went straight to the bottom, hip first. It was a month before he could really skate again. He also had a really hard time sleeping for two weeks. Grim. If he had been wearing knee pads, there might have been other bail options. If you think this pic looks bad, just know it got much worse a few days later. 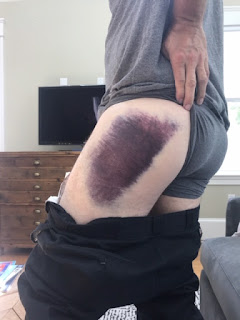 Indirectly, there is that whole soft/connective tissue and bone density thing. Older "athletes" (e.g. me) are much more susceptible to tears, twists, and ruptures of soft and connective tissues (think cartliage, tendons, ligaments, etc.). Running out of tricks, specifically on bigger transition, is a great way to damage some of this stuff, esp. if you just happen to come down wrong on your knee or ankle. Knee slides are great alternative to mitigate some of the risk. I am not saying I knee slide out of every bail. That's just crazy talk, but given a situation where it would be reasonable to knee slide, I will always take that option over the chance of an ankle or knee twist.

It all distills down to this truth: Avoiding injury today means skating tomorrow. Pads make it much more likely I will be skating tomorrow, and that is all that matters.

(2) The Mental Factor
There are huge mental factors in skateboarding. Anyone who has looked down from the lip of a vert ramp before their very first drop-in, or eyed their first real handrail, or even wrestled with hesitation before doing an acid drop off a curb for the first time…no matter the context, every skater knows about the mental anguish intrinsic to skateboarding. Unfortunately, this becomes much more acute with age. Pads have an undeniable mitigating factor to this anguish. Personally, I would not have started skating transition without pads—I was simply too scared of bailing, and bailing hard (and this is coming from a guy who used to do 10+ stair handrails). Pads removed a huge part of that fear, and opened new doors for me. They literally changed everything about my skating in the last 18 months. After 30+ years of skating, I have finally fallen in love with transition, and it feels like I am 12-years-old again, and have (re)discovered skateboarding for the first time. Pads made that happen. I couldn’t be happier or have more gratitude.

(3) Pushing Boundaries & Skating Beyond Your (Current) Ability
Once you combine the fact that (a) pads actually work, with (b) their impact on the mental factor, you get to see the real magic start to happen. Pads allow you to skate beyond your current ability or skill level. You can bail stuff without getting hurt, and you can try stuff (that you already know you can’t yet pull), without the fear of injury when you bail. The two feed into each other. We never know what we are fully capable of until we push ourselves to the point of failure. Pushing beyond your current ability is where progress, and new tricks, happen. Sure, this happens any time you try something new (pads or not), but adding pads to the equation moves the needle of how willing and how far you can push yourself. If I am going to "fail," I want to still be able to walk away unscathed for work the next day.

(4) The Counter-Narrative / Battle Gear is Punk
In an age where Thrasher won’t even publish photos that show someone wearing pads, and there are padless pros flirting death in pro bowl competitions, anyone wearing pads serves as a counter-point. It is good to have realistic counter-narratives for the common-man and common-skater; a narrative that shows there is nothing to be ashamed of, and that pads can actually open doors to new tricks and terrain, especially for those of us who are not gifted with insane natural skill, or have aged-out of the ability to immediately bounce back-up from a hard-slam, or heal-up from injury in sort time. I am proud to play a small part in that movement.

Moreover, pads are fuckin’ punk. Maybe even more so now than ever before. While I have never once heard a skater bash another skater for wearing pads (esp. on transition), I have often heard skaters express that they personally don’t like them, or “couldn’t bring myself to wear them.” If pads are an unspoken “uncool,” then wearing them is a spoken “fuck you” to elitist cool-guys. I find nothing more enticing. When I first started skating, one appeal of skate culture was that exact attitude towards mainstream society. I still embrace that. Pads are an overt anti-fashion and anti-ego statement to jock-types caught in the latest skate fashion trend. The counter-narrative has a nice ring to it. “This is me. These are my fucking pads. Fuck you, and fuck your ideas of social compliance.”

(5) The Long-Game of Perspective
I am almost 45-years-old. One thing has been with me my entire life; skateboarding. Jobs, pets, friends, family, lovers, material belongings, etc. have all come and gone. All of life is flux and change. That said, skateboarding has thankfully remained one of the more constant things. I am under no illusions of perpetual youth and invincibility. Skateboarding won’t last forever. The end is closer and closer every day. Eventually my body will crumble, break, and fail beyond any point of return. Bukowski once said, “If something burns your soul with purpose and desire, it is your duty to be reduced to ashes by it.” And that is exactly what I intend to do. I’m riding this train until the very last  wheel falls off in a smoldering pile of broken bones and scarred flesh. That said, I am not trying to burn the candle at both ends. I am knowingly and intentionally playing a long-game strategy. With that, your perspective shifts. One of those shifts is a real effort to stay healthy and injury free. To that end, I now find myself doing things that were inconceivable in my younger days. Things that include, among others, stretching, trying to eat well, exercise outside of skateboarding, and, well, wearing pads even when I skate small 4' high mini ramps.

Time and age strip a lot away from us. Ultimately they take everything, even our lives. However, they also provide great gifts. One of which is the perspective and ability to fully understand how important and meaningful some things are to us. Skateboarding is one of things. If you think this post is about wearing pads, you are not entirely wrong. But, there is something larger. What this post is really about, is taking steps to continue doing something you love, as long and as far, as you possibly can. Never stray from the things that make you glad you are alive. Keep them as close as you can, for they constitute the fabric of our lives. The Sartre quote at the top of this post is on-point. A lot of sand has escaped the hourglass of my life, and because of that, I certainly now see things with clearer vision.

Here is a short clip of me doing something I love, with pads on (well, there is some padless street skating, too).