Today is March 26th. I still have not been back to the ramp since the first session on March 3rd. There have been a few set-backs which have prevented me from getting over to the ramp.

First, was a major snow storm that took place on March 4th or 5th. Can’t remember the exact date. I shoveled the ramp out on March 6th. 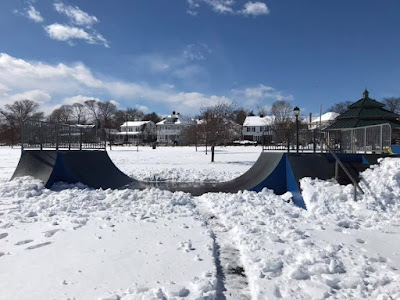 But then then melt-off caused one corner of the flat bottom to flood-out pretty bad. It wasn’t skateable until ALL the snow and water was 100% gone. That took awhile.

Second, my car died its final death. I am junking it next week. While I can still take public transportation over to the ramp, it just takes longer and requires more planning/time to make it happen.

Third was a this knee injury sustained on March 9th. That had me out for a week or so.

Fourth was this 9 alarm fire that took place on March 15th next to the subway station near the ramp. The station was closed down, and they were running shuttle buses for a few days, which would make the public transportation trip even more cumbersome. As of now, subway service has been restored, but it was out on a few days when I wanted to head over there (right after knee healed-up).

Firth, and most recent is a fuckin’ kidney stone which hit on March 19th. I am getting it surgically removed on March 28th, but it’s had me out of commission for over a week now. I wouldn’t wish a kidney stone on my worst enemy.

All this said, I am still confident I can meet this challenge. Assuming no other catastrophe hits after the kidney stone comes out, I can hopefully get in a few sessions before my 45th birthday on April 17.  I did 35 trick on the first sessions, so I only need 10 more to make 45. I feel good about that.
Posted by sedition at 11:39 PM