Three things happened in the last week that have me reassessing some basic assumptions about pads/safety gear. Moreover, they all played directly into my existential fears of an older skater who wants to ride this train as long as I can.

First, is this clip of my friend Chad. Nollie bigspin to disaster.  A trick he has on lock. But things occasionally go wrong, as they did here.

WOW. Imagine what would have happened without that helmet. That type of slam is my second most feared slam on transition (my MOST feared transition slam is the type that broke my leg).

So, I often skate a 4’ tall mini ramp. Before I broke my leg, I wore knee/elbow pads about 75% of the time when skating it. Post-injury I wear pads 100% of time on it, esp. because now I can’t “run out” as well as I could before the leg break). However, I never wore a helmet there because the ramp seemed too small to merit a helmet (more on this below). Well, those days are now over. Seeing Chad’s bail has prompted me to now ALWAYS wear a helmet on that 4’ ramp. Head injury is kind of like cancer, or covid, or a bad car accident--freak occurrences don't seem real until they happen to you, or someone you know. Seeing this happen to someone I know made it a lot more real to me.

The second and third things that happened are intertwined. First, I was skating the aforementioned 4’ mini ramp three days ago. The session was winding down, and I headed over to the street area for some more laid-back skating. I was considering taking my kneepads off, but was feeling a bit lazy, so I didn’t. About 10 min later I did one of those things were you run with your board a bit before hopping-on (to gain speed). It ended badly. I am not totally sure what happened when I finally stepped on my board. Front wheels might have hit a rock. I might have gotten wheel bite. I might have misplaced my foot. Not totally sure. What I am sure about it is that I suddenly went down HARD as soon as my board hit the ground. My forward momentum sent me directly onto my forward knee (and hands). Pad slipped down (don’t think gasket did), and I got a pretty bad abrasion on my kneecap, which also swelled up a bit. Hands got chewed-up, too. Now, a knee abrasion is no big deal. I’m not concerned about that at all. What DID freak me out was thinking about what would have happened to my kneecap if I did NOT have pads on when I fell. That could have been very bad. This fear was greatly exacerbated 24 hours later… 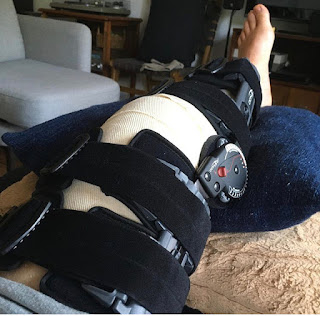 “Dan” has been skating for 30 years. He did a lipslide on a small ¼-pipe. Something went wrong on reentry, and he went straight to his knee...and fractured his kneecap (no pads on). He made one comment about it that really hit home, “I broke it doing something I thought I had in the bag. I didn’t think I skated ‘hard’ enough (to get a serious injury, or to need pads).” If that last sentence doesn’t ring true to many of us, I don’t know what does (e.g. see my comment above about the 4’ ramp being “too small” for a helmet).

So, all of this stuff, especially Dan’s comment above (and my diminished ankle capacity), now has me really re-considering some of my basic assumptions about when I wear gear (and when I don’t). And this is coming from someone who already wears gear more than most probably do. I’m not sure where all of this is going to land me, but I'm taking a hard look at some of the choices I make.
Am I just being reactionary to a few freak accidents?
Maybe.
Probably.
Most definitely.
But tell the guy, who who badly broke his leg doing a set-up trick he's done 1000s of times before, not to worry about freak accidents. Oh, right. That guy is ME.
UPDATE: I made this little railslide bar that fits exactly in the back of my car. Last night I went out to skate it, and before I left I had this common mental debate with myself, "It's just a mellow street session, I don't really need pads." But I decided to bring them. Well, check out this switch stance frontside railslide to fakie...I am pretty sure I would have shatter my elbow cap without an elbow pad on. Turn the sound up, and hear how hard that hit. Note that after I got up, I tapped my elbow pad and gave the "thumbs-up" symbol. I instantly knew it had just saved my ass. To reiterate the point: you do not need to be skating "hard" to get a serious injury. That is something all of us know, but sometimes it is easy to forget, and I've just had uncanny amount of reminders this week.
Posted by sedition at 9:04 AM