Yesterday I tried out the new Ace AF1 trucks. While they made some minor improvements over the previous generation, I just didn’t like them. Towards the end of the session I remembered the set of Thunder Hollow Lights that were in the back of my car (kept there to give away to some kid with a shitty set-up). When I tried those out before, I had never taken them to a good “slappy curb.” Since I was currently at one, I decided to throw them on my board give them try (and give myself a reminder about Thunder trucks). Holy hell. Those. Things. Are. Horrible. Despite having softer 91a Bones Bushings in the trucks they just do not turn. At all. It’s like being stuck on a monorail. No soul. No joy. No fun. These two truck experiments clearly solidified the fact (which I already knew) that I am just an Indy guy, and always will be.

Pain Isn't the Problem. Injury is.

Here we go, again.
Well, I am out of commission for a short bit. Yesterday I went to the park to skate a 5' mini ramp. I was getting warmed-up on a little 2' quarter pipe. On my fifth warm-up trick (a b/s disaster), I slid-out. My kneecap went straight to the coping. Session over. Swelling, bruising, and limping. I'm now off the board for a few days because of it. I hadn't put pads on yet (for the 5' ramp) because I wasn't yet "skating seriously enough to need them." How laughable is that? Irony always wins in the end.
Upon knee/coping impact I had an, "OK, I am fuckin' DONE with this" moment that is best summed up in this paraphrased comment by an Internet friend.
"I am not too concerned about pain, or getting hurt. What I am concerned about is injury, because that means I can't do things I care about (like skating). I wear pads all the time. I don't mind taking the extra time, and maybe even looking a bit silly, if means I don't have to sit on the sidelines for days/weeks as my body heals from something that was easily preventable. I want to skate, not wait to skate."
I've been skating for over 30 years. I know more than anyone that injury is inescapable. That said, at 47-years-old, I now have greater desire to mitigate those inevitable injuries. What galls me the most about this particular one is how utterly avoidable and unnecessary it was. Slip on the knee pads, and I would be skating instead of typing right now. I think because (a) this was such a simple/dumb injury, (b) that was 100% preventable, (c) on such a small ramp, (d) on such an easy trick, (e) that occurred moments before I was about to put my pads on (for a bigger ramp), that it actually shines a much brighter light on the larger issue.
All this said, I already rock pads more than most skaters. And after yesterday, I think I might start rocking them even more in the future, even when I am "not skating seriously enough to need them." I'm kind of "done" with these small, stupid injuries that could absolutely be avoided. Not like I haven't written about this exact issue before. This time feels a bit different, however. Time will tell. My proclivity to act against my own self-interest, at times, seems to have no bounds.
Posted by sedition at 9:39 AM 2 comments:

Vans recently discontinued their "Pro" line, and rebranded it as the "Skate" line. Moreover, they made a few design changes in their shoes for the relaunch (I won't go into/list-off all the details about the specific changes, just go look at the Vans web site).

I skate in the Old-School "pros" and the SK8-HIs "pros." I recently got a pair of the new SK8-HIs about two weeks ago. Normally when I get a new pair of shoes, I wear them for about two weeks before I even step on a board with them because I despise the feel of very "new" shoes on a my board. So, I have not even skated in these yet. That said, here are my initial reaction(s) to them. So far, most of it is negative.

(1) They are hot. Much hotter than the Pros. My feet are roasting.

(2)  The tongue does not move, at all, because of the newly added internal tongue straps. This is good, because I hated how the tongue would always slip around on the older versions. This also makes them much harder to put on/take off.

(3) I still have some pressure points around the little toe on one shoe. This never happened before with the Pros.

(4) Two weeks in and they still feel quite stiff, as in, not broken-in at all. Around two weeks is when I would normally start considering skating in the Pros. These do not feel like they are anywhere near "ready" yet. What that means long term remains to be seen. Further on this point, Vans always felt "comfy" to me, almost out of the box. These have not yet reached that state. When I got home from work last night I was dying to take them off. That never happened before with the Pros.

APRIL 4, 2021:  FIRST STREET SESSION
Despite the SK8-HIs not feeling "ready" yet, I took them for a quick session today. I realized after about 10 min of skating that while these are not "broken in" yet, that they may never feel "ready" in the same sense the Pros did--and this is simply because the Skate version is an overall stiffer shoe. I made some peace with that, and just went on skating. There were three distinct things I noticed.

First, board feel is NOT the same. Pros def have the advantage on this. It's not like wearing cupsoles or anything, but it's not the board feel I loved about Vans.

Second, pop was much more crisp. This was a really interesting one, that took me a bit to figure out what I thought was going on here. But when I did, it made perfect sense. So, Pros are more flexible than the Skate line, which is stiffer. So, imagine running in sand, or trying to ollie on grass. Think about how much power/energy gets lost when you push-off/ollie, because the energy gets dissipated into the sand/grass. Now think about running/ollieing on hard concrete. You get a much more explosive run/ollie, because not as much energy is lost. To me, it seemed like this analogy was like Pros vs. Skate line. With the Skate line being stiffer, it felt like more direct power was transferred into my ollies/noilles, and as a result, the pop was much more crisp and responsive. The trade off, of course, is board feel. I'm really curious to see if anyone else notices this "crisp pop" phenomena, or if it was just in my head.

Third, the comfy factory (mentioned above) still isn't there. I skated for about 30 min, and afterwards I was really like, "Damn. I want to take these things OFF!"

APRIL 5, 2021:  FIRST MINI RAMP SESSION
And today was my first mini ramp session in these. Here is what stood out:

(1) Board Feel was bad. I skate with Kingfoam Elite insoles. I feel like these give you even more board feel than the stock Vans insoles (maybe that's just me). Even with these in the Sk8-HIs, I almost felt like I was wearing cupsoles. After skating for a while, I started to adjust a bit, but it really just felt like I had cement shoes on.

(2) STIFF. For some reason I noticed this more on transition than street. They just felt really, really stiff.

(3) Sticky. Maybe the soles still need some breaking in, but my feet feel way more "stuck" to the board when adjusting feet in the flat bottom for next wall. This got kind of dicey with some of those micro-adjustments you have to make mid-trick/on the lip sometimes. The new Skate line has the same SickStick sole as the Rowan Pro, which is porobably why I'm noticing them being a bit gripper than the Pros were.

(4) Pressure points in toe box got real bad during run-outs. Bailing/running out of a trick on tranny really jams your foot into the toe of the shoe. The pressure points mentioned above started to get really sore after skating awhile because of this. Eventually I started knee-sliding (I wear knee pads on mini ramps) on bails that I would otherwise would have run-out of to avoid the pain of the run-outs.

(5) Get these off my feet! Again, when session was over, I wanted nothing more than to just take these shoes off.

None of this has ever happened to me with the Pros.

I was not too happy. If these do not improve with time, I would seriously consider trying the "regular" Vans. Or some other brand. And that is a horrifying thought. More updates to come as we move forward. 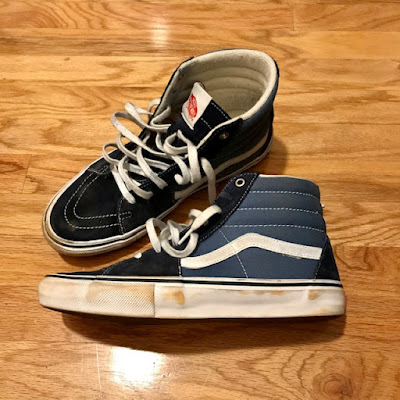