Wisdom From the Acient Masters of Alt.Skate-Board (Part 7)

Thoai Tran wrote 14 installments of Zen and Skateboarding. Here is Part 7. See introductory comments I wrote on this post for full context of the entire series.

I have looked at this old dusty mirror for many years now. Its dullness has distorted my view of reality, causing me to see things differently, to convince myself that I am looking at the truth; when, in fact, I have seen nothing but false delusions. I have been deluded for too long now, and it is time to take a wet cloth and clean the dust, the dullness that covers this mirror, the false projection of reality that has forever prevented me from seeing the truth. With a glass cleaning bottle and cloth, I will remove all the fleeting dust particles that have distorted the reality that was, the reality that is and that will be.

My skating has been forever dull. It is covered with these fleeting objects that have prevented me from seeing the truth. But as the dust which covers my mirror shall be removed with a wet cloth, so do all these superficial objects shall be removed with the sweeping motion of time. The layers of clothing, the shoes, the trends, the fashion styles, the competition, the pride, the arrogance...all of these will be lost with time...inevitably. Only the eternal qualities shall remain to shine, to manifest themselves as the reality that was, that is and that will be...

My friend, take a moment and look within yourself...look at the mirror which you call your skating. Is it covered with these superficial objects which have clung onto your soul and prevented you from seeing the truth? Everything will disappear and be lost with time, but only the eternal qualities will remain. The current style of clothing will be lost with time, to be replaced by different ones. Invitably. The shoes will be worn out, disappeared, and forgotten. The girls which clapped at you whenever you skated by will seek different bad boys to applaud at. Inevitably. The people whom you skated with at the spots will put their boards down to pursue different hobbies and fads. The last skateable spot will be made illegal. My friend, when all of these are gone, will the love still be there? Will that love still be there to shine; or will your skating, like the dust which covers this mirror, be lost with time's sweeping hands?

My friend, reflect on this. Seek within yourself the qualities which are hidden beneath the layers of superficial objects. The love...the feeling of contentment and happiness for what you do...the harmony within yourself as you incorporate your surrounding universe whenever you step on that board, as you become one with your skating...the dedication to the purest and most fundamental truth. My friend, even when a mirror is dull and covered with dust, it still has the innate nature to shine brightly and reflect the pure and essential truth. The truth will always remain...it will always be there. What is that essential truth?

My friend, reflect for yourself...

Posted by sedition at 5:46 PM No comments:

The Kids In the Parking Lot

Last week, on Nov 14th, was the long awaited opening of the Boston’s mega skate park. 15+ years in the planning, 4.5 million dollars, 40,000 square feet, 3 bowls, huge street area, etc. Tony Alva, Ray Barbee, Andy MacDonald, and others were on hand for this historic event. I saw some rad skating go down, but the coolest thing I’ve seen in 30 years of skating happened right before I left. It was something that most people wouldn’t have even noticed, and if they had, they probably would have scoffed at it. Non-skaters certainly would have.

Skateboarding is becoming more “accepted” in common society. A park like this never would have happened 20 years ago. In 2015 we see a lot giant corporations entering the skateboard market. There are non-skater owned chain “skate shops” at the local mega mall. Adidas. Nike. Street League. Skaters ringing the closing bell on Wall St. The renewed push for skateboarding in the Olympics. Etc. For a long time skateboarding was very much an “outsider” activity. Be it a white suburban punk, an inner-city hip-hop kid, an artist, or metal head, to be a skater required you to be, on some level, “confrontational” with society. Now things seem a bit different. Many fear that with the sanitization of skateboarding via Big Corporation, Big Money, and Olympic status, that some part of skateboarding will “die.” Now that Boston (and many other cities) has a giant skate park, will going to the park become almost the same as going to the baseball field for “practice?” Will skateboarding become as mundane, and “safe,” as baseball, football, and basketball? For some, it might. And that is great. More power to them. Others shudder at the thought. However, what I saw on opening day, just as I was about to leave, was an affirmation that the heart of skateboarding would never change.

There, in the parking lot, rather than skating in the 40,000 square foot park, a few kids were skating a simple, little, curb. I couldn’t but help think of John Lucero, getting kicked out of Skate City, and skating the curbs outside the park. I saw these kids, and smiled. It was so…pure. A tear almost came down my face. I’m sure others would have seen this, and thought, “Dumb-ass kids come to a 4.5 million dollar park just to skate a curb…just like the one in front of their house.” The shinning example those kids illuminated is that no matter what carrot is placed before skaters, be it corporate sponsorship, Olympic gold, or a brand new, massive, skate park, there will always be those who buck the system, and follow their own path, and do things on their own terms. There will always be skaters running wild in the streets. Even in the shadow of greater things, there are those who will still rebel, and enjoy the simple...like skating a curb. The future of skateboarding looks quite different than it did years ago, but it also looks quite good.

Below is a photo of those kids, passing on a subtle, but very profound lesson for all who care enough to see it; The bling doesn't matter; skating does. 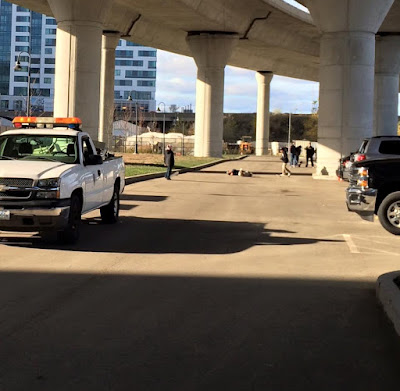 Posted by sedition at 5:36 PM No comments: