Roll For Rob, DIYing It, and Some Other Stuff

[I’ve always tried to only post when I have some larger point or message to convey. While this has not always been the case, it mostly holds true. I’m going to end that, at least for the time being. I have long maintained (and written about) that if you can’t find liberation, or meaning, in daily life, then you won’t be able to find it anywhere. Hence, I am going to start including more posts about “mundane” daily life, and the meaningful things, good and bad, that I experience on the day-to-day.]

It’s 12:50am on Tuesday night. I am at work. The bar is empty. Consequently, I don’t have much to do. I broke out the laptop, and started typing away. A few updates from “This American Skate Life” (phrase stolen from David Thornton).

(1)  I’d be a miss if I didn’t mention something about this…There was Roll for Rob event last weekend in Boston. Friday night was an art show / silent auction. Various people donated artwork for it, including the likes of Todd Francis, Mark Gonzales, Jason Jesse, Mark Oblow, Shapard Fairey, etc. Todd Francis is a favorite of mine, and I would have loved to see an original of his in person, but no go. I had to work. Oh, well.

Saturday was the big skate jam at the Lynch Family Skate Park. Despite the park having been open for over a year, I’ve only skated there about three times. I hate dealing with big crowds at skate parks. Always have. Always will. I headed over to Lynch on Saturday because (1) It’s a good cause, and (2) I wanted to meet Jim Theibaud. He and I have been conversing on Instagram for a while, and I’ve been involved with a few of the Deluxe Build Projects (via Max Hesh skates hop, and I won one of the individual grants). I rode my bike over Saturday afternoon. The place was total chaos. Worse than expected. So many skaters. Despite having my board, I decided I wasn’t even going to bother trying to skate. Place was just too hectic. A few promotional booths were set up to one side. I hung out near those, and just watched for a bit. After I had been there about 15 min, Jim T. comes skating up to the booths (he had JUST arrived to the park). After it looked like he was finished making the rounds with everyone, I went over to introduce myself. Before I was even done, he said, “Yeah, I know who you are. I recognize you.” I was floored. I responded with, ‘Well, I just wanted to say hello,” and then I wandered off, not wanting to force some weird manufactured conversation. I had said all I wanted to say. Shortly after I headed home, and went skating for a while in my area of the city, alone. I was still rolling for Rob, however.

Yesterday, I saw this group photo taken at the event. Skateboarders do amazing things off the board, too. All of it was very inspiring, on many levels. 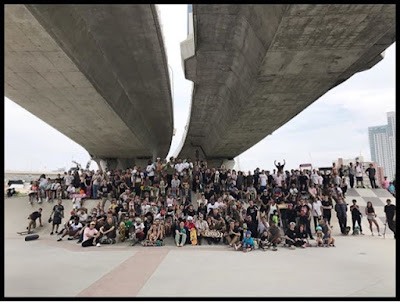 (2)  We’ve been making a lot of renegade DIY stuff the last month or so. We built up abandoned street in Boston, and it’s really turning into a legit DIY spot. Six builds are there already, with more soon coming. It’s a great feeling when I see clips on Instagram people doing rad shit, and having fun, on something I (and friends) built. It’s a cool way to give back.

(3)  I turned 43 in April. I’ve been feeling physically old. It just takes so much more effort to do the same things that were “effortless” when I was younger. The effort it once took to skate a bench now feels like the same amount of effort it takes to skate a curb. Noah Baxter said it best, “Gravity is stronger now.” It certainly is. Worse, it takes so much longer to get “warmed up.” Age is a real thing. It’s coming for me. I consider myself lucky enough to be acutely aware of that fact. Hence, it makes everything in the moment more meaningful, and for lack of a better word…precious. I certainly won’t be able to “roll forever,” but I’m riding this train till the fuckin’ wheels fall off.
Posted by sedition at 11:51 PM 2 comments: