A Place on Earth

This a story of curbs, the afterlife, personal chaos, and finding a moment of sanctuary. 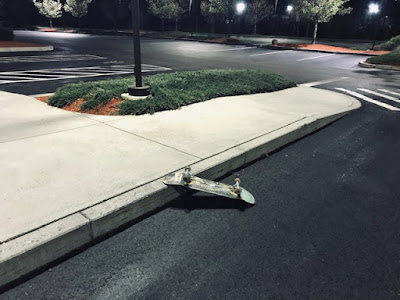 A ritual is an act regularly repeated in a set precise manner, often performed in a sequestered place and according to a set sequence. Meditation is harder to define. Suffice to say it may be used with the aim of reducing stress, anxiety, depression, and pain, and increasing peace, perception, self-awareness, and well-being. Some claim it can lead to enlightenment.

The older you become, the longer it takes to get “warmed up” on a skateboard. Some years back I developed a “warm-up” routine. It was around 20 or so curb tricks that are mirror images of each other. B/S ollie to tail. F/S ollie to tail. B/S blunt. F/S blunt. Etc. I could often tell how well a session was going to go based on well how the warm-ups went. After I broke my leg, these were no longer “simple warm-up tricks.” They had all been transferred into major goals to hopefully one day again achieve with some degree of regularity. Much of my recover to this point has been relearning these “warm-ups.”

My elderly, crippled, and financially insecure parents were told two days ago that their lease would not renewed on Aug 1st, 2020. They do not own a home. They now have three months to move. They have lived at their current location for 15 years. They will have to relocate into a substantially smaller place, and will likely be forced to shed about 2/3rd of their entire belongings. I will probably have to finance most of their move. Emotion and stress levels are running very high.

I went skating tonight. I arrived at a curb I often skate. They place was utterly deserted. Even the drone from the nearby highway was absent. Its abnormality was actually bit eerie. The Corona Virus has caused a blanket of silence to fall across the night. I was alone in a quiet world with my curb.

I started doing my warm-up tricks, and then realized that I was actually doing “an act regularly repeated in a set precise manner, often performed in a sequestered place and according to a set sequence. I was performing a ritual. One I had developed long, long ago. Skateboarding can be many things. Some of those are things like “reducing stress, anxiety, depression…and increasing peace…and well-being.” My warm up tricks. This wasn’t just a ritual, it also had aspects of meditation. Especially now.

I stopped skating for a bit, and just listened to that unusual, deep stillness that enveloped the land. My mind drifted. I’ve been thinking about that Grosso birthday tribute a lot over the last week. Towards the end of it, Lucero says something to Jeff like, “Make sure there is a nice curb for me up there in heaven.” I remembered this quote, and then heard myself say out loud, “Me, too. Me, too.” I surprised myself that I had done this. A voice from nowhere that shattered the silence. I looked around for brief second to see where it had come from. In doing so, a veneer was lifted.

Fifteen feet in front of me was a nice curb. The veneer wasn’t just lifted it. It was shattered. It was like flying through clouds, and then breaking into the endless blue sky. A wave of euphoria and deep understanding swept over me. I almost started to cry from joy. “Make sure there is a nice curb for me up there.” The object and intentions of eternal happiness are not some abstract utopian concept. There are here. Now. I was actually standing in paradise at that very moment. And for that moment, sanctuary was mine.

Some claim that ritualistic meditation, even in the midst of chaos, can lead to enlightenment. I (now) believe them.
Posted by sedition at 7:54 AM No comments: