Chasing Phantoms & The Mythology of Rainbows

There had been a few passing rain showers in the area. The skate park, however, was mostly dry. The sun began to peek-out from behind the clouds. A few moments later a huge, vibrant, double rainbow appeared in the sky. I thought quickly--it would make a cool/funny backdrop for a skate photo, esp. considering the whole GLBT thing (I'm gay if anyone is reading blog for the first time). With the rainbow in the background, Joe took my cell phone and filmed me ollieing over a makeshift picnic table/box. This is a screen grab from that video. 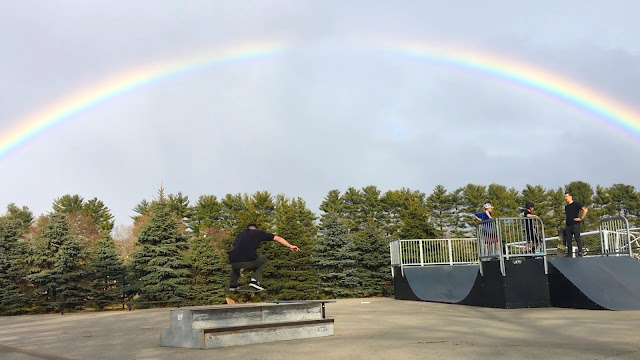 (Here is a side shot of a different time I ollied it, so you can get a better idea of the size. It's not small.) 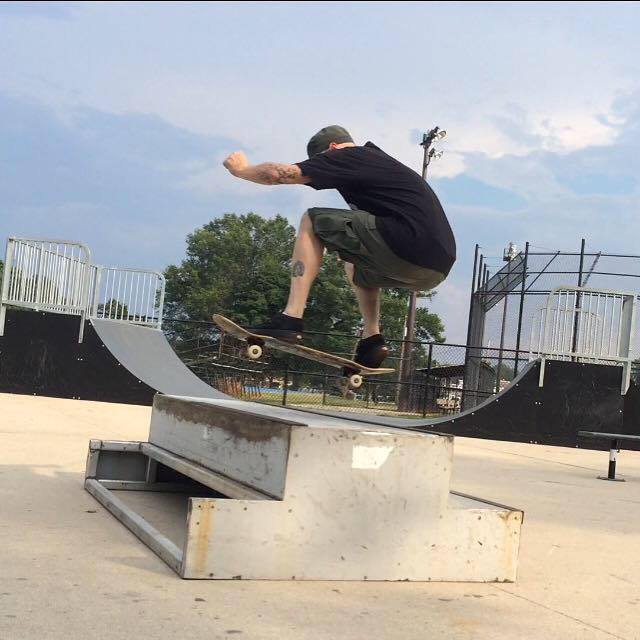 A little kid, who was about 12-years-old, came up to me afterwards. He looked up at me with big eyes, and sheepishly asked, “How do you ollie so high?” I laughed to myself when I heard the question. When I was his size and age, I wondered the same thing about older skaters. I responded that my legs were stronger than his, that I was taller than he was, and most of all, I had been skating for a very long time, and had spent years doing ollies. I told him that if he kept skating, he would be able to ollie much higher as he grew up, and got more practice. I gave him a few pointers on technique, and then went to sit in the shade for a bit.

I sat down behind the mini ramp, and looked up at the two giant rainbows that lingered in the sky. I followed their arcs with my eyes, looking to see how far they stretched, and where they ended. Then it really hit me.

The mythology of rainbows is that a pot of gold lies at the rainbow’s end. Of course, no one can ever reach the rainbow’s end. It’s actually quite a stark, and bleak metaphor: there are hopes and goals you can never reach, no matter how hard you try. Worse, while chasing phantoms, you lose sight of the fleeting gift that is right in front of you; the rainbow itself.

“How do you ollie so high?”

As a kid, I chased that pot of gold. I wanted to ollie over a crack in the sidewalk. Then a stick. Then a curb. Then a bench. Then a handrail. Always wanting to go higher and further. Never satisfied with where I was, or what I could already do. Always pushing. Sure, there is merit in that. But then a 12-year-old kid asks you a simple question, and your world changes.

To that kid, I had the pot of gold at the end of rainbow. The ollie I did was unimaginably high and unattainable, at least to him.  When I was his age, I thought the same way when I saw people do “big” ollies, or pretty much any trick for that matter (well, actually, I still pretty much think that when ever I see anyone else skating).

Personal progression is always a part of skateboarding, no matter how old you are. We always push for longer, higher, faster, or to learn something entirely new, or relearn something we used to be able to do. We are doomed to forever chase targets that we ourselves are always moving.

That 12-year-old illuminated something profound. Sometimes it’s better not chase, but to just enjoy what already is. I sat behind the mini ramp for a while, and watched the double rainbow fade away to nothingness. Its existence now just a memory. Another perfect life metaphor. From across the park I heard my friends laugh while skating a curb. I stood-up, looked at the sky that was now nothing but gray clouds, and smiled.  With a profound sense of gratitude, I pushed-off in the direction of my friends, and that simple curb.
Posted by sedition at 2:14 PM 1 comment: