Is This The End?


Today is August 25, 2019. I broke my fibula with ligament damage on May 21, 2019. Surgery was two days later on May 23, 2019. Almost exactly three months later, where are we now? To be honest, things look a bleak. Two days ago the orthopedic surgeon said the fracture was completely healed. While that is great news, there is another, much bigger problem—my ankle. 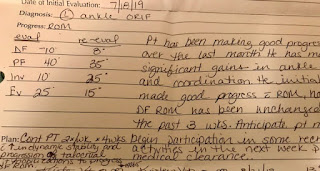 There are two problems with my ankle. The first is swelling. The second is flexibility. My ankle has dramatically lost its range of motion. Because of that I am still limping. Going down stairs is hard, and skateboarding is like try tying to play the piano while wearing oven mitts—you know what to do, but there is a physical barrier. To make matters worse, the orthopedic doctor said he “usually tells people at three months they are seeing 75% of what they are going to get back.” That is simply horrifying. Another 25% is not going to enable me to run, or skateboard. I need more than that. A lot more. Things in my ankle still hurt.

My next appointment with the physical therapist is this week. I am going to ask her if I should get a second opinion about my ankle. They put a screw in my leg, which the orthopedic doctor said, if removed, would not make any difference in flexibility. Others have seemed to indicate the exact opposite. I don’t know what to think right now. I just want my ankle to move again.  The idea of not really being able to skate again is horribly depressing.

In related news, wearing a sock feel really weird over the surgery area. I am not sure if that is from the scar tissue, or from being able to feel the plate in my leg. It feels really weird, and I don’t like it. Second, since I haven’t been able to do any exercise in the last three months I’ve gained like 10 pounds, and I feel really gross/disgusting. Apparently I need to go on the first diet of my life. Third, due to swelling my foot, I can’t yet comfortable put on my hockey skates. God knows how long it will be until I am back on the ice, and what mental factors I will have to overcome learning to ice skate again, of it I'll even be physically able to do so.

That is the physical stuff. Mentally, I am pretty depressed right now. I had a lot of hope to up and running again (pun intended) by the fall.  Now, all I have is medical professionals indicating that things are not going to improve much beyond what they currently are. If they are correct, where does one turn when hope is gone?
Posted by sedition at 9:36 AM 1 comment: