If you have not read the first part of this test (seen here), you should do so before proceeding any further.

ONE-WEEK FOLLOW-UP: I returned a week later to skate the curbs again, and rerun the tests. Unfortunately, my friend Joe was not with me to compare results. I did not add any additional wax or spray to the curbs. I wanted to see how weathering, etc. impacted their performance. As a reminder, the enamel and lacquer were applied about one week prior to the very first test. So, keep in mind that they had two weeks of exposure compared to the waxed curbs. How did everything hold up?

(1)  DIY WAX: Wax on top of curb was mostly gone. Could still see some on the grinding edge, but not much. The vertical surface still had a bit. I expected this to happen. This is the wax I’ve been using/making for a few years now. It is soft, melts off in the Sun, and is subject to weathering. One the flip side, it is very cheap, and easy to make. How did it grind? It didn’t. At all. Tail slides were a no-go. Too much of the wax had weathered away. I know from previous experience with this wax, that a quick reapply would have made things grind/slide again.

(2)  Shorty’s Curb Candy Wax: Visibly, it was the same as the DIY wax (e.g. mostly gone). However, its 50/50s were a go from the first attempt. This surprised me. It wasn’t as fast as last week, but no question, it was grinding. Tail slides were a little sticky, and didn’t go far, but they went. Curb no longer smelled like a Martha Stewart Christmas Holiday Project. Thank God.

(3)  ENAMEL: The curb appeared just as it had last week, maybe with a little less sheen. It did not grind, at all. Likewise with tail slides. I was surprised by this.

(4)  LACQUER: This also appeared just it had last week. It was still slick, and grinded/tail slid right from the start. I wasn’t AS slick as it was last week, but it was still the best of the four.

Notes: It seems that for best results, use lacquer for initial priming, and then touch-up with Shorty’s if/when needed. Since these posts have gone public, a few others have mentioned bar soap and Gulf Wax (paraffin) as other good options. As result of this test, I now have a lot of extra enamel, lacquer, Shorty’s Wax, and DIY wax. I will replicate these tests on different type curbs, and throw soap and Gulf Wax into the mix. A long-term follow-up will be posted at some point in the future.

Welcome to The Wax Wars

DISCLAIMER: Lubricating any grinding surface is a socio-political issue. This article will not enter such realms. Those situations must be navigated on your own. Tread carefully, as there is no fury like that from an over-waxed surface. What follows is based on the assumption that one seeks to prime a virgin, concrete, unpainted curb/ledge. With that assumption in place, what are the best options? Below are findings from a comparative test of common “moisteners.”

INTRODUCTION: Our test case was four identical, concrete, raw, unpainted, virgin curbs. We did not brick rub them. Each curb was treated with a different lubricant. A friend (Joe) and I then did about seven 50-50’s on each. After the grinds, Joe would do about 5 nose slides, and I would do about 5 tails slides. We would then compare notes, wipe off any residue on our trucks/board, and move on the next curb, and repeat the process. The review will include wax/spray application, initial skating, and a one week follow up session. The “winner” will be assessed on all of these factors.

TEST INGREDIENTS
(1)  These curbs (seen in their virgin state). 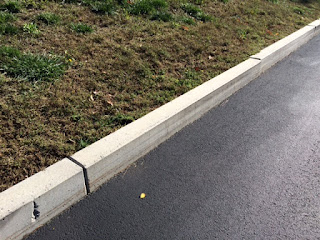 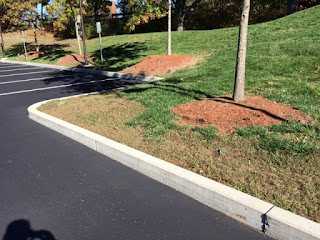 (2)  Independent Trucks (Joe and I both ride Indys) 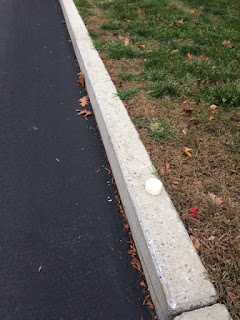 (4)  Brand Name Wax (Shorty’s Curb Candy). Thanks to Max Hesh for hooking me up with these and/or sponsoring Wax Wars research. 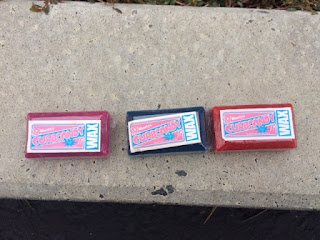 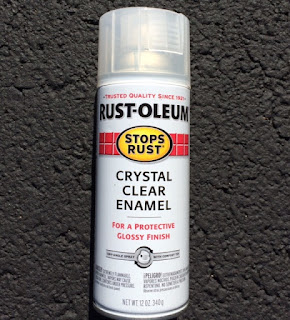 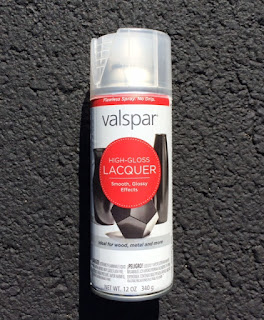 TEST 1: INITIAL APPLICATION & APPEARANCE
(1)  DIY WAX:  I ran the wax twice down the edge of the curb, without much pressure. This wax was pretty soft, and went on easy. However, because it was soft, it was a little messy on my hands. Once on the curb, this wax was almost invisible to the untrained eye. In photo above of the DIY wax, it has been applied to the curb, but not yet skated.

(2)  SHORTY’S WAX: After I took the plastic wrapper off, I was hit with a wafting smell. Scented wax. Great. Just what I always wanted—a nice aromatic curb. This wax was much harder/denser than the DIY wax I made. As a result, I had to put in real effort to rub it into the curb. Worse, my hands now smelled like a Yankee Candle air freshener or some other kind of Martha Stewart potpourri holiday incense project. Super dreamy. Because of the color (blue), it was now apparent that someone had done something odd to this curb. I forgot to take a photo of the curb right after the Shorty's wax was applied.

(3)  ENAMEL: To be honest, I had never before used spray enamel or lacquer on an unpainted concrete curb. As such, I wasn’t sure how much to apply. I ran the spray twice down the length of the curb, top, edge, and side surface. It went on fast, and covered more surface area on the curb than wax did, and did so with an even coat. However, the curb instantly looked stained, or as if it was “wet,” or had been “defaced” in some manner. This appearance did not change once the enamel dried. After about 15 minutes (and when it appeared to be dry), I added a second coat, going two lengths of the curb. I am not 100% sure what the actual dry time is, as I did not skate this curb till a few days later.

(4)  LACQUER: Same as above, but the lacquer appeared to “stain” the curb even more than the enamel did (although it looks the opposite in the photos).

(5)  TEST 1 COMMENTS:
a.     Sketch Factor: Spraying shit on a curb from a can looks really sketchy. People are definitely going to think you are up to something if they see that going down. However, it goes on faster, and you can quickly cover a larger area. Putting wax on a curb can done in a more subtle manner, and doesn’t immediately look like you have defaced property.

b.     Mess Factor: With spray, the curb immediately looks stained, wet, and messy (like you actually vandalized something). This appearance does not go away when it dries. The white DIY wax did not immediately appear to blemish the curb, and could go mostly unnoticed by civilians. The Shorty’s was blue, and added a bit if color to the curb once applied (not to mention the Christmas Tree Shop aroma).

c.     GO! Factor: Wax is ready to go as soon as it is on the curb. Spray needs to dry. If you are adding a second coat, it takes even longer before you can skate it.

(6)  TEST 1 WINNER: No clear winner. Wax is more effort to put on, but is instantly skateable, and does not appear as if you have just vandalized property. Sprays go on very fast and/or cover a lot of surface area, but it takes time to dry, and might look a bitch sketchy.

TEST 2: THE FIRST GRINDS
(1)  DIY WAX: The first few grinds didn’t go that far. In fact, the board came to an almost dead-stop a few times. After a few 50/50s, and a bit of aluminum getting laid down, I was grinding the entire length of the curb without problem. I still needed a bit of speed, and needed to lean back, but things were indeed grinding. I skate a bit faster than Joe, so I was getting 50/50s out of this curb before he was, but not by much. A clear scar was seen on my trucks, so this was a definitive grind, as opposed to just gliding over a slicked-up surface. A noticeable amount of wax residue was on my trucks after a few grinds. Tailslides went ok, but they felt “waxy.”
(2)  SHORTY'S WAX: Curb immediately grinded for both of us, and did so with a nice feel. However, the effect/wax seemed to wear off quickly; the curb soon started to stick. Tailslides were a go at first, and felt lass “waxy” than the DIY stuff, but then they also started to stick. Joe had the same experience with both 50-50s and noseslides.

(3)  ENAMEL: I sprayed a curb with enamel on Sun 10/23, and we did not skate it until 6 days later. No idea if this had any impact on the slickness of the curb. Joe and I both had a hard time getting the enameled curb to grind, or do a decent nose/tail slide on. These results struck me as odd. I've heard good things about enamel, and expected it to be faster. Of the four tests, enamel had the worst initial results for both of us, on 50-50, and nose/tail slides. I have painted parking blocks with red enamel paint before, and those became super fast. Maybe it was the lacquer I also used in that case??

(4)  LACQUER: Likewise with the enamel, we were not able to skate this until 6 days after initial application. Lacquer was the clear, undisputed winner of the initial grind test. It immediately grinded for both of us, and was much, much faster than any of the other test cases. Nose and tailslides were also very fast. The curb itself even looked slick. It had rained earlier in the day, and Joe and I both noticed that water had beaded-up on top of this curb. This was not the case with enamel.

NOTES: After skating all of these curbs for the next 30-40 minutes, both waxes and the enamel started grinding a bit better. We naturally assumed this was due to layers of aluminum getting deposited on the edge of each curb. With time, nose/tail slides became a little bit stickier on both the enamel and waxed curbs. The lacquer never changed, and remained slick and fast the entire time.

(5)  TEST 2 WINNER: Lacquer was the clear winner. Shorty’s Wax came in 2nd place, and DIY wax and enamel were tied for 3rd place.

We did a a one week follow-up session. Results are here.