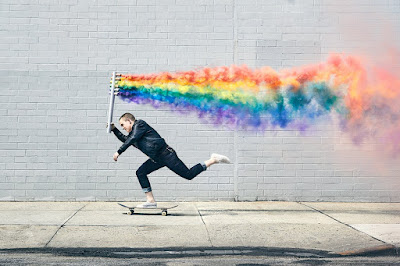 Well, it’s June. That means gay pride events/parades around the country. For the last week or so, for some reason, I have felt compelled to write something about this subject. I am not quite sure why. Actually, compelled isn’t the right word, “obligated” is. Again, I ask why. Gay pride in Boston starts this weekend. The big parade is next Saturday. I have a lot of mixed feelings about it.

The first “pride” event, in June of 1969, was a bunch of liquored-up transsexual/transgender/drag queen prostitutes who started an actual riot, in retaliation of/for/to police brutality at a local gay bar in NYC. That night they decided to vote with a brick. Three nights of riots followed (sounds a lot like modern police/race relations, actually). Today, gay pride parades are family orientated events. They are often nothing more than advertisements for corporate banks, local politicians, and churches. People march down the street in pretty rainbows, behind a nice little banner with assorted corporate logos, as if they are walking commercials. Street League for homosexuals. Is this what we fought for all these years? To walk behind a bank’s advertisement?  I know I am oversimplifying the issue, but at the same time, I am absolutely not.
I suppose I feel compelled obligated to write something about “pride” because I know how important it is to be “out.” It’s a lot harder to be a homophobic asshole when one of “those people” is someone you “know.” That, in turn, helps make the world a more livable place for everyone. Part of me wants to touch on that issue, especially in the context of skate culture, because I am indeed one of “those” people (and skateboarding could certainly use it, despite the influences of BA, Lacy, etc.). Or maybe I could talk about, how what I learned from skateboarding, helped me to actually “come out” some 20+ years ago. But, I am so over per se identity politics. I’ve been “out” for over 20 years. At least in my life, being queer is mostly a moot point by now. It’s just like…*yawn*. Big fucking deal. Do I need to rehash this, again? Can't we just go get tacos, or skate a curb? To those who think of me, or anyone, as lesser person because of their sexual orientation, I'd be more than happy to take the claw side of a hammer to your face.
And yet another part of me just wants to unleash on everything I despise about so-called “gay culture.” Because of skateboarding, I grew up dirty, bruised, bleeding, in the streets, running from the police, listening to crazy-ass music, and hanging out with crazy-people, as we did crazy-ass shit. The world of high-fashion, fancy cocktails, show tunes, rainbows, some pop-diva wailing about some bullshit, and overall fabulousness makes me want to cut off my own arm, and then fist myself with my own severed limb. Ok, maybe I’m being a little bit dramatic (I am gay, after all. I mean, aren’t we’re supposed to be dramatic, or something?). That said, I really don't want this blog to dwell on the negative, so I am hesitant to totally unleash. I also don't want a skate-based blog to focus on what I despise about gay culture. Don't get me wrong--there is nothing inherently wrong with all of that stereotypical “gay” stuff I listed above, it’s just not a world I can relate to, at all. Glitter, rainbows, Armani, and Madonna? Fuck that. Blood, bikes, skateboards, and punk rock. And yes, the irony is not lost on me. I know that I am the classic stereotype of a (older, washed-up) skateboarder. I've got my Dickie's, my old-school Vans, Indys, Antihero decks & attire, and pads when I ride even a small 4' mini ramp. I own that stereotype as much as others own their vile, sick, twisted, unholy, unfathomable Beyonce/Gaga/ABBA obsessions.

So, in terms of what to say about “gay pride,” all these reservations just leave me with a void. A void that I still feel an obligation to fill. I guess the only thing I really have to say, which I learned from both being a skater, and from being “queer,” is to be who ever the fuck you are, and tell the rest of the world to go fuck themselves. One thing I know for sure, is that no one, NO ONE, on their deathbed is going say, “Man, I wish I had lived a less authentic life.” Be who ever you are, and rock that party as hard as you fuckin' can.
Posted by sedition at 2:05 PM 2 comments: