Leg & Foot Condition: It’s still swollen and bruised, but not as much as it was two weeks ago. Feeling is still blunted in my foot…but maybe not as much as it was? It’s hard to tell with gradual changes. I can move my toes and ankle a bit more, but it’s still really limited. Ankle area (ligaments??) feel really stiff, and sore. Toes feel kind of stiff, too. I am more concerned about pain in ankle area now than I am about hurting the break. My calf and foot are no longer really sore when I go from laying down (or keeping foot up) to standing up-right. Hands, wrist, elbows, and shoulders get a little sore from the crutches, too. My leg must be getting really weak from non-use. PT should be interesting.

Housing: I am still at my parents’ place, and will be here at least until I am weight bearing. Maybe longer. TBA. Taking a shower is a pain in the ass. Life is definitely easier here than it would be at my apartment in the city.

Mental State: I’m bored as hell. I was bouncing around with Joe during the day when he was here, but he left the area last week. Now I’m on my own.  I need to find things to occupy myself with. At night I can go some pretty dark places when in bed/can’t sleep. The future can be a scary place. I need to stay in the moment as much as I can.

Skateboarding: This is a long way off. I’ll certainly be doing dry-land hockey stuff long before I am skateboarding again.

Hockey: I got a really nice stick (for ice). I’ll be able to use it for stick handling / shooting once I am weight-bearing. I also want to get a new pair of gloves, and a shooting pad/board for once I get cleared for all that. It’s something short-terms (before full recovery) to look forward to.

Weight: I am worried I’m going to get fat while being totally inactive. I need to watch what I am eating.

Next Visit: They claim I could be weight-bearing (50%?? 100%??) at six-weeks. My exact six-week date falls on the week of July 4th. I couldn’t get an appointment until July 11th, so technically that will be a SEVEN week follow-up. I am kind of bummed about having to wait an additional week for that visit, but it is what it is. Right now I am a bit skeptical that there will be much of change in my foot in the next three weeks. I’ll just have to wait, see, and hope.
Posted by sedition at 10:00 PM No comments: 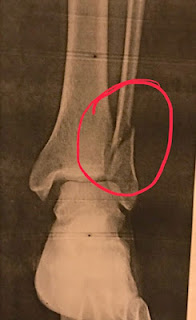 On Tuesday, May 21, 2019 I broke my fibula and fucked-up the ankle ligaments in the process. I had surgery two days later. Today I had my two-week follow-up. Stitches removed. I found out that during surgery they put in a plate, five bolts, and one big-ass screw. I’m still non-weight bearing (e.g. on crutches) for at least another 4 weeks. Down to a removable air cast which is great.

My lower leg, ankle, and foot are still really swollen. Feeling in my foot is blunted. I can barley bend my ankle. They say with time, and PT, all that will go away. All I can do is wait, and hope.

I was skating a 6' high mini ramp when it happened. It was my first time on that ramp. The previous day I stated that the ramp was "cursed." Now I know that it is. I later found out that the ramp/park is KNOWN for broken bones and other serious injuries. The place even has a nickname, "The Bone Shaker." Indian burial ground or some shit.

I did some trick on one wall, and didn't like my feet placement on the way out of it. Ok, I figured, do an easy set-up trick on the next wall, and just reset. On the next wall, I did a nollie to rock to fakie. A trick I’ve done a million times. When landed on the coping, my board slid ever so slightly. It was enough to make my foot placement even worse. I briefly considered just bailing at that point, and knee sliding out. But, I decided to hang-on. "I can ride this out, it will be sketchy, but I can ride it out." Bad decision. I should have listened to my first instinct.

By the time I got to the bottom of the transition, and just started to enter the flat, I knew I was going to go down. I tried to step off my board and just run out. I planted my foot, but my leg kept going. I fell onto my leg with foot bent to the side. I immediately knew something BAD happened. I don't really remember taking my pads off, or my shoe, or waking across the park, or up the hill to get to my friend's van, but apparently I did. Adrenaline is a hell of a drug.

I remember making a lot of noise in the ride to the hospital. Half of it was from pain, the other half was out of utter existential frustration--I knew I wasn't going to be skating for awhile. I knew I wasn't going to be playing ice hockey. I knew I would be missing work. I knew my summer was now shot. I knew bad shit was going to go down. I knew my world had just radically changed, and I was pissed, angry, frustrated, and sad that all of that was going to happen...all because I decided to roll the dice on a fucking trick I knew I should have bailed-out on when I had the chance.

I've broken plenty of bones before, and had metal put in my body (metal rod in arm from a motorcycle wreck), but never anything this incapacitating. This is a whole new experience for me.

I'm now two weeks in to what could be a "three to six month" recovery, and my perspective has changed a bit since that car ride. More on that in my next post, but some context is in order.

My dad contracted Polio when he was an infant. He is now confined to a wheelchair, but had previously walked on crutches his entire life. I will walk again. He never will. In just the last six years my mom has had a knee replacement, three spine fusions (the metal rods in her back broke), and recovered from a broken hip/femur. Both of my parents have ALWAYS been in good spirits during these situations. Real role models for how to deal with adversity. Against that backdrop, I don't have much to complain about. 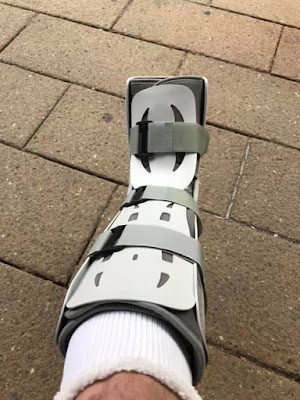