Today we are reviewing some quasi “oddball” items, but they are things that every skate DIY’er should know about. Moreover, I’ll share how we transformed a totally unskateable curb into a local hot spot.

1.    Rust-oleum “Professional High Performance Protective Enamel” paint (“Safety Red, K7764”), $35-$55 per gallon. You can get smaller amounts for much cheaper.

Short Version: Take a super crusty parking block, brick rub it, give it two (or more) coats of red paint, and after the paint dries, spray it with lacquer. You will now have a kick-ass curb that will slide and grind like crazy.

Long Version: Last year we started a skate collective, as a local chapter of The Build Project (kicked off by Real, Anti-Hero, etc.). One of our smaller projects was to paint some local curbs and parking blocks. None of us had ever painted curbs before. We had no idea what the best type of paint was, how much to use, how to seal it, etc. In short, we had no fucking idea what we were doing. I solicited help from numerous “curb consultants,” and was given several different suggestions. Rustoleum “Professional High Performance Protective Enamel” paint kept coming up again and again. A friend ordered some on-line, but they wouldn’t ship it our state (MA) because it was “too volatile.” Leave it to us to inadvertently order “bomb making” material. There was an alternate version which they would ship, so that’s what we ended up with (the alternate version is what I am reviewing. Not really sure what the originally ordered version is/was).  Once we had the paint, the brushes, and the brick-rub, it was time to get down to bid’ness.

First, we painted a local curb that was made of marble. When we were done, it skated great. That said, it skated well before we painted it, too. The REAL test was going to be on a few parking blocks we had our eyes on. These blocks had never been painted, even when they were first manufactured. They had been long abandoned, and were quite weathered and corroded. Crusty-as-fuck. Even with wax, they didn’t slide. Grind? Forget about it. Would painting these actually make them skateable? I had deep skepticism. Take a look for yourself. This is one the blocks before we did anything to it. These photos aren’t pretty. The curb has a face that only a true curb junkie could love. 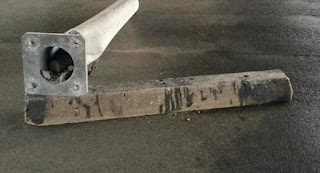 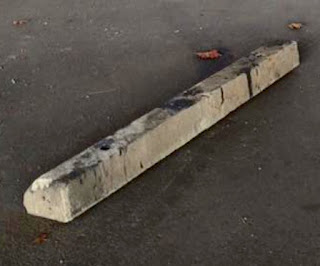 BRICK RUB: One of the guys in our collective extolled the virtues of “concrete brick rubs.” I had never heard of these things before. They are used to smooth out edges of bricks, and hardened concrete. Essentially, they are just really gnarly pieces of sandpaper for really gnarly materials. I was told that if you, “Just smooth the edge with a brick rub, and add some wax, you can skate any ledge.” Yeah. Right. Nike really cares about skateboarding, too. 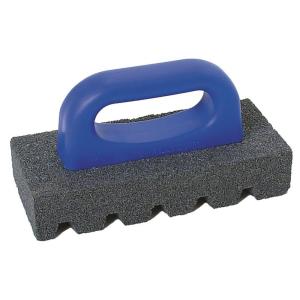 Well, it was time to put this brick-rub thing to the test. I took it, and “sanded down” the edges of the parking blocks. It certainly had a dramatic impact on the way the edges LOOKED, as it smoothed out all the kinks and gnarly spots, but there was no chance that just a bit of wax was going to make these monster crust blocks skateable. To be honest, I was skeptical that the paint would have much of an impact, too. That quickly changed once I started painting the curb. The paint was thick as hell, and I painted the blocks with really thick coats. By the time the curb was ¼ way painted, it started to look like a “real” parking block. I let the first coat dry for about 18 hours, and then added a second coat. After 24 hours I added a layer of the spray-on Lacquer (that shit dries super-fast). At this point, the blocks were GLOWING with color. They were begging to be skated, almost mocking me to even try grinding them. Yet, I was still a bit skeptical as to how well all of this was actually going to work. Indys, don’t fail me now, it’s show time. Five minutes later I was hitting all kinds of board/tail/nose slides across both blocks. Grinds were almost effortless. My mind was melting. I was completely blown away. This now totally skateable curb was its own, perfect, self-contained skatepark. There were other suggestions/methods made about how to treat/paint curbs, and we may try those in the future, but for now I can say with 100% certainty, that the method described above will indeed transform an unskateable, crusty-ass curb into something you will love. I have seen the transformation with my own eyes. The magic is real. 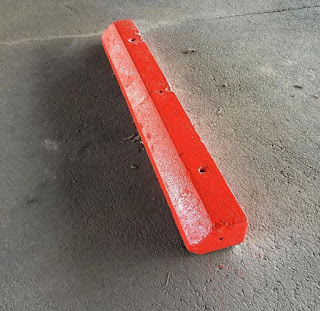 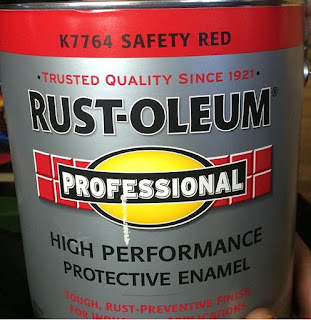 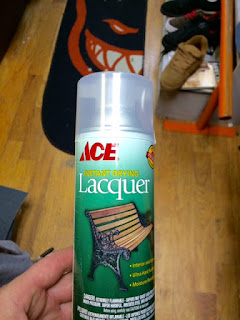 Posted by sedition at 9:22 AM No comments: