And…I’m out on injury. Again.

The last year I have been plagued by injury. Two bad sprains. Tendonitis in two different spots. With physical therapy, the latter was making good head-way. I was skating a lot more, and getting a lot of the rust off (from being out on injury). I couldn’t skate as much, as long, or as hard, as I wanted, but I was skating, and that is better than nothing. This week I actually thought one afternoon, “Hmm. I haven’t been off-the-board injured in awhile.” Spoke too soon. The very next day, I jacked my right foot bailing a backside blunt on a Jersey barrier. Here is a small feeble grind I did moments before the b/s blunt injury. 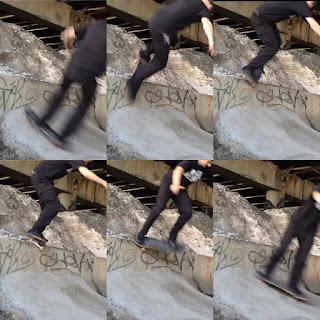 What I wouldn’t give at this point to just have solid 3 months of skating without injury, without having to hold back how often/hard/long I skate for, and without being in some serious joint/tendon pain the following day. The reality is am 42, not 22. Age is a real thing. I have almost resigned myself to the fact that I will never again be injury/pain free for an extended period. And isn’t that just disheartening. On the other hand, ever time I have fallen, I have gotten back up. Every time I have been injured, I have healed. I have no question that I will yet again. In the meantime, there is acute frustration. Frustration that I can’t do what I love, and frustration that I know injury is going to be more and more common and frequent as time goes on. Lance Mountain made that one comment, “Skateboarding doesn’t make you a skateboarder; not being able to stop skateboarding makes you a skateboarder.” Some real truth to that, as only the injured know. And then there is the John Lucero quote, “My knees are ruined. My back is blown out. I have a hard time walking. I’m going to have a hard time getting up out of this chair in a second, and it’s all because of skateboarding. And it feels so good. It feels so good to know that you’re a skateboarder, and that’s it.”

There is no question that I will be back on the board again. There is also no question that, eventually, I will again be off the board due to some unknown future injury. Both are inevitable. The ying and yang of being a 40+ skater. "Sometimes you have to just say “fuck it” and keep doing the possibly injurious thing, because even that fall will lift you up in the end." -Concrete Lunch. There is also this and this, great posts on essentially the same topic.