What Could Possibly Go Wrong? (Trials and Tribulations of a Turbo Dolt)

I am out on injury again. I haven’t had a serious one in a quite a while (2+ years??). I was overdue, and knew it was coming. It finally happened last weekend.

I was skating a 4’ high mini ramp with some friends, and was having a bit of an “off day.” I was even considering calling it quits early. For some reasons, I just wasn't feeling all that confident on my board, and was bailing things I normally have "on lock." I should have listened to my gut and left/stopped skating. Sometimes there is a 6th sense. However, the sessions' energy picked-up a bit, and I decided to stay a little longer. In the middle of a run I did a backside Indy Nosepick. On the reentry I was leaning too far forward. I thought I could ride it out, and almost did. Eventually, I got pitched forward just as I was approaching the other transition. I ended up squarely shoulder-checking the dead center of the tranny. Instant flash of pain. I thought I had broken my collarbone.

I went home, and it got worse. Later I went to the emergency room. X-Ray said no break, but that I might have a “shoulder separation,” whatever the hell that was. I had a follow-up with an orthopedic guy early in the week. He confirmed it was indeed a Stage 2 separation of theAC joint. He said it should heal on its own in about six weeks. I asked when I could start skating again. He said, “Ideally, not until all shoulder movement is painless.” But then he paused, and added, “You seem like a serious skateboarder. Somehow I think you’d be eager to get back at it. A Stage 2 separation can easily become a Stage 3, requiring surgery to fix, if there is significant additional trauma at the start of the healing process. IF you were to start skating before pain was completely gone, and I would advise against, I would wait several weeks, until things are feeling much better. Moreover, shoulder pads of some kind (hockey or football) could help limit further trauma to the area.” I could read between the lines, and knew that I would buy hockey shoulder pads in the near future.

I am really bummed out by the timing of this injury. First, no skating for six weeks? Ugh. That’s a long time. Second, it’s now early autumn in New England. This is the best time/weather of the year for skateboarding, and I will miss out on a good chunk of it. Third, my best friend Joe is leaving the area for an indefinite period at the end of the month. I wanted to get in some final sessions with him. Last, in early October I am going to Austin TX for a week. The purpose of this trip was to (a) skate drainage ditches, and (b) skate with a bunch of other people from around the country. I’ve never skated (or even seen) a real ditch before, so this was a “bucket list” trip. Now, it’s just frustration of purpose. My only hope is that my shoulder can heal-up as soon as possible. But, well, I kind of, maybe...well, I might have just prolonged that a bit by doing something obtusely dumb. I went skating tonight, and fell on it again, without any pads. Yeah. Let's play "Find the Turbo Dolt." Oh, right, it's me.

The city of Boston is renovating a large public park near my apartment. Baseball fields. Roller hockey rink. Soccer field. They are also putting in a new “pump track.” Two nights ago Joe and I went over to see how it was coming along. To our surprise, the surface had been finished. It was dusk, and we “broke in” to the construction site to get a closer look. Joe grabbed his board, and I told him to get mine, too. I took some real mellow runs. The track was unbelievably fun. More fun than almost anything I had skated before. It soon got dark and we left. We made plans to come back today, after the construction workers had left, but before it was too dark. If I was successfully able to roll around the pump track after dusk, I assumed I’d be fine carving around it during daylight. I was wrong.

The day before I had actually purchased a set of hockey shoulder pads. I had even mod'ed out a hockey jersey to wear over them. 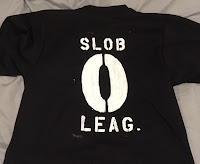 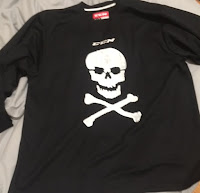 My plan was to probably wear them toward the tail end of recovery when I started skating again, and then sell them at Play-It-Again sports once I was healed-up. I was debating bringing them over to the pump track tonight. I put them on, and the weight alone was enough to make my shoulder hurt. That should have been enough of a red flag. It wasn’t. I decided to not bring them. I also thought I should wear shorts and bring my knee pads. Sometimes when you stumble out of something, you could either drop to yours knees (if you had pads on), or just roll on to your side (and shoulder). The latter is the most common way people bail, but I was worried about that “roll on to your side/shoulder” option. Dropping to knees would be a much better option right now, even if not usually the most practical way to bail in a “street/bank” setting. But, I decided to also forego knee pads, and off to the pump track I went.

So, let’s review. I have a Stage II separated shoulder that is only 8-days old. I am not supposed to be skateboarding. I was advised to wear shoulder pads. Knee pads would potentially be a lifesaver. Oh, did I mention I was wearing brand new shoes, too? What could possibly go wrong?

We had skated the track for about 45 min the other night, with no problem. I felt like I had pretty good familiarity with the bumps/transitions/quick turns/etc., and knew what to expect. On the first run I get through the bigger parts of the track, and enter the mellowest set of bumps near the end. Something happens. I’m still not sure what, but I realize that I am going to go down. I step off my board, and start stumbling, realizing that I could have dropped to my knees, if I had knee pads on, but I don’t. To avoid shattered kneecaps, I do what 30+ years of skateboarding muscle memory has taught me to do; roll on to your side, and take the impact with your arm and shoulder. And that’s exactly what happened.

The pain was instantaneous. Hell, tying my shoe and wiping my ass hurts my shoulder right now. But this? It was bad. Real bad. I was convinced I had just turned it into a Stage III, and would soon be back at the hospital for surgery. I was infuriated at myself for every bad decision I had just made, starting with even getting on my board in the first place, not to mention leaving the pads at home. Was it now going to be TWELVE weeks before I could skate again? I seethed and boiled. I wanted to sit down and cry with frustration, anger, and stupidity. How could I be so dumb?  I went home, took Advil, put ice on my shoulder, and headed-out to work about an hour later. I was in the foulest mood I can ever remember having during my adult life. Everything was foreseeable, and was 100% of my own doing. How could I be so dumb?

It’s now 3:26am. I am home from work. The constant pain has mostly subsided in my arm. That is a good sign. It hurts more than before, but now it also feels different. Before it hurt, but that was mostly it. Now it hurts, but also feel like something is out of place and/or not aligned correctly. Super dreamy. I am going back to the doctor’s ASAP to see if there is additional damage.

Morals of the Story:
(1) Don’t be an idiot and skate when you are injured.
(2) Pads are your great friend, when you don't ignore them.
(3) Expect the blog to be a lot more active over the next few weeks during recovery.