The Danny Way Incident of 1989

This photo forever changed the course of my life. And almost ended it, too. 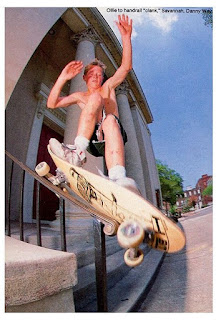 It was published in Poweredge Magazine, October 1989, Volume 2, Number 9. It is a photo of the world famous skateboarder Danny Way. We were both 15 when this photo appeared (he is two days older than I). Every kid has their heroes, and he was mine. I can’t remember when I first latched on to him. I know by 1988, when Shackle Me Not came out, I was already entranced, and he had already reached hero status. The wall next to my bed was covered with every photo of him I could find.

Then the October 1889 issue of Poweredge dropped. That one photo. The bottom of my world dropped out. Total collapse.

When I saw first saw this photo in 1989, a blinding, horrific, and crippling light bulb went on. I realized that D. Way wasn’t just my favorite skater. Under the surface, a lot more was going down. When my eyes came across this little handrail photo, I also realized I had a “crush” on him. Like, a legit actual Beatle-mania/teenage girl-Justin Bieber type crush; I realized that I had no interest in girls. None. Zero. Not going to happen. Ever. This was the photo that fully crystalized the fact that (1) I was queer,* and (2) there wasn’t a damn thing I could do about it.

Terror swept over me. I went deep into the closet, and even attempted suicide when I was 16. Things were much, much different back then. I finally “came out” when I was 19. First to skater-friends, and then my parents. Things have great ever since. The irony is that my skateboard hero, and first “school girl crush” turned out to be a homophobic asshole, who, in time, would be tangentially involved with a gay bashing that ended with someone dead, and Josh Swindell in jail for almost 20 years.

“One thing I know for sure, heroes always die.” –Husker Du

*I hate the word “gay.” It congers up way too many, albeit totally stereotypical, images of a culture I don’t relate to in any way. Madonna. Premium fashion brands. Brunch at fancy restaurants. Vapid self-absorption. Mincing and preening around the disco. Overall “fabulousness.” There is nothing inherently wrong with all that, it’s just not my world in anyway, what-so-ever. My world is Slayer, blood, scabs, punk rock, PBR, and skateboarding.